Sophie Pascoe is the most successful Paralympic athlete New Zealand has ever produced. At the age of 15 she became the youngest medal winner at the 2008 Beijing Paralympics - winning an amazing three gold medals and a silver. 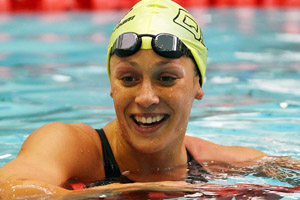 Born in Christchurch on 8 January 1993 Sophie was accidentally run over by her father on the family ride-on lawnmower, resulting in both her legs being caught under the cutter deck housing in the path of the rotating mower blades. As a result of the accident, her left leg was to be amputated below the knee, while the rear of her right leg was left with severe scarring. She began swimming at age 7.

At the 2008 Summer Paralympics, Sophie won a gold and a silver medal for the 100 m breaststroke and 100 m butterfly respectively and later a gold for the women's 200 m individual medley. She then shared a gold medal for the 100 m backstroke. At 15 years of age, she was New Zealand's youngest athlete at the Paralympics, and the youngest ever New Zealander to win a medal

Following the 2008 Paralympics, Sophie was voted New Zealand's favourite Paralympian in a nationwide voting competition run by Mitsubishi Motors. For this she won a Mitsubishi VRX Outlander. She was made a Member of the New Zealand Order of Merit in the 2009 New Year's Honours, for her services to swimming. In February 2012, Pascoe became the inaugural winner of the Disabled Sportsperson of the Year award at the 2011 Halberg awards.

In March 2013 Sophie broke her own world record for the 50m butterfly at the New Zealand Swimming Championships in Auckland, setting a time of 29.21 seconds.

On April 16, 2015 Sophie set the pool alight with an outstanding world record on the penultimate night of finals at the New Zealand open swimming championships, when she became the first S10 category para-swimmer to go under the one-minute mark in the 100m freestyle, winning the event in 59.77s to break the world record and gain her fourth qualifying swim for July's IPC world championship in Glasgow.

Sophie Pascoe is the most successful Paralympic athlete New Zealand has ever produced. At the age of 15 she became the youngest medal winner at the 2008 Beijing Paralympics - winning an amazing three gold medals and a silver. Sophie made New Zealand history at the London 2012 Paralympics Games claiming an incredible six medals from six events – three gold and three silver – and at the recent Rio 2016 Paralympics claimed three gold and two silver, taking her medal tally to 15 and earning her the title of New Zealand’s most successful Paralympian of all time. For her outstanding achievements in the pool, Sophie has been awarded the New Zealand Order of Merit, the 2016 Halberg Sport New Zealand Leadership Award and the Halberg Disability Sport Foundation Disabled Sportsperson of the Year in 2011, 2012, 2013 & 2015. Her autobiography "Stroke of Fate" which speaks of great determination, courage and commitment was launched in 2013.

2011:      Halberg Award for Disabled Sportsperson of the Year