Simon McKinney is NZ’s #1 stand up Character Impressionist and a much sought after comedian for both live, touring and corporate performances. 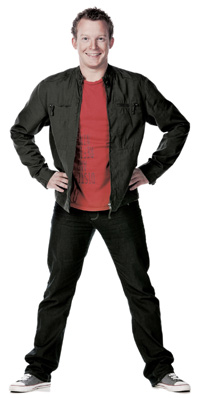 Simon is an all-round comedy gem. His clean, warm and generous style has seen him become one of New Zealand's leading live comedians and MC's.

Simons material appeals to a wide variety of ages and he is adept at tailoring his comedy to his audience.

He is New Zeland's #1 character impressionist. His imitations of Arnold Schwarzenegger, Sylvester Stallone and "The Move Guy" have always made him a crowd favorite. His impersonations of everyday folk such as "the Kiwi lady", "that drunk guy" and his international accents that connect him with his audience and give him true global appeal. Because of this Simon is heavily in demand as an MC and guest comedian for blue-chip corporate events.

Simon's career started in full strength when in 2004 he did a 2-year stint on the UK pro circuit, where he performed at two Edinburgh Fringe Festivals and then went on to do a massive 300 gig run across Britain. On his return to NZ, he hit the ground running opening for Irish comedy great Tommy Tiernan and "Whose Line Is It Anyway" star Greg Proops.

Simon has won numerous comedy awards and his solo show "People" saw him nominated for the prestigious Fred Dagg Award in 2011, and in 2007 he was voted by his peers New Zealand's Best Male Comedian at The NZ Comedy Guild Awards. He has appeared on many stand-up comedy tv shows including The Comedy Gala and A Night At The Classic.

Simon is an established and experienced comedian, his fun and generous style of quirky comedy charms one and all!

"It's McKinney's accents which really give his stories stand out quality - the local vocal tics complement perfectly the material, from the spot on Scottish accents to the inflection of the Kiwi accent in the supermarket." - TVNZ

Comedy Christmas Cracker - The Work Do

A Night At The Classic - Tv2

Land of The Lone White Clown

A Bit Of A Yarn