Samantha is a social entrepreneur and one of the leading advocates of sustainable fashion. 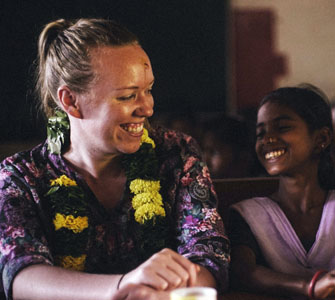 Samantha is an ex-military officer turned social entrepreneur who is recognized as one of the leading advocates for sustainable fashion in New Zealand. Growing up in Indonesia, Sam was able to observe firsthand the issues facing those in developing countries. She was struck by the frequent exploitation of those employed to make products for the West. This early exposure to the abuse of vulnerable people ignited her passion and drive to work for the fair treatment of others.

With a Bachelor’s degree in Commerce and a Masters in both Engineering Management and International Security, Sam became convinced that business was the most effective way to support people in developing communities. Her interest was drawn to the garment industry in particular during her years as a Logistics Officer in the Royal New Zealand Air Force. Wearing a uniform day in and day out sparked an idea: What if there was a company that produced ethically and sustainably made workwear, at a reasonable price, and with an efficient timeline from clothing design to product delivery? And Little Yellow Bird was born.

Little Yellow Bird, which was started when Sam was 25, is now the leading supplier of ethically made and organic cotton uniform in Australasia. Sam continues the fight to change the garment industry, campaigning for workers’ rights and funding projects that aim to break the cycle of poverty prevalent in developing communities.

Sam has been recognised as a finalist for Wellingtonian of the year and the New Zealand Women of Influence Awards.

Starting a global business (My story)