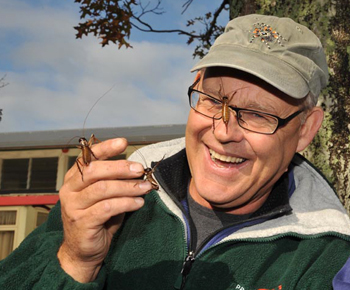 Known in New Zealand as the "Bugman",  Ruud was born in 1952 in Indonesia where he spent the first few years of his life worrying about the prospect of a ripe coconut falling from the palm under which his pram was parked.  Two years later, he shifted to Holland where he was educated.

Despite all this, he managed to complete his MSc degree at the Wageningen Agricultural University.  The topic was Silviculture, also known as "forest torture".  You plant young trees, fertilise them so they grow fast and strong and then you thin them, prune them, rip all sorts of limbs off them and finally cut them off at the ankles.
Forestry was really nothing more than a vehicle to get into ecology and biology so, after migrating to New Zealand in 1978, it was not more than logic that his interests were translated into some serious and not so serious studies of this country's flora and fauna.
He studied the feathered variety of kiwis in Waitangi Forest for 18 months, worked as a scientific advisor to the Nature Conservation Council in Wellington for a year and carried out all sorts of weird jobs for the DSIR before finally settling down as an entomologist with the Ministry of Agriculture and Fisheries at Lynfield's Plant Protection Centre.  There he was involved for 14 years with a variety of entomological topics, ranging from quarantine and pest surveillance to aircraft spraying techniques.
Since February 1996 he's been a "free agent" and works as a consulting entomologist for a wide range of companies and clients, including MAF, airlines and the food industry.
Ten years ago, Ruud decided that insects and "creepy crawlies" have been getting "bad press" for far too long.  His crusades to heighten the positive image of these fascinating creatures (which are vital to our survival) included columns in newspapers and magazines, a weekly talkback radio programme on Newstalk ZB ("Ruud's Awakening"), plus some appearances on television (ranging from "What Now?" to "Maggie's Garden Show"). Ruud also lectures on plant protection at the Unitec Polytechnic in Auckland, is a member of the Auckland Zoo Enterprise Board and a Trustee of the Little Barrier Island Supporters Trust and of Project Crimson.
Bug Man honoured by University of Waikato
11 April 2008
New Zealand's king of the creepy-crawlies, Ruud Kleinpaste, has been awarded an honorary doctorate from the University of Waikato.
Ruud, commonly known as the Bug Man, said it was fantastic to be recognised by his scientific peers.
His honorary doctorate was conferred recently as part of University of Waikato graduation ceremonies at the Founders Theatre in Hamilton. More than 1600 students will graduate from the University of Waikato in the coming days.
Ruud holds an MSc honours degree in silviculture (trees), animal ecology and conservation from Wageningen University in his home country, the Netherlands. However, he had no idea the University of Waikato was planning to honour his work on insects in such a way. "It came out of the blue; I was stunned. It's really brilliant."
He said it was a huge honour because it came from his peers and also because his work in "popularising something everybody hates" had sometimes been viewed as dumbing down entomology.
However, using enthusiasm and the media to communicate with and involve people was key to raising awareness, he said. "I still believe that it's the way to do something for the environment, and for the next generation, that's the way to communicate."
Over many years, Ruud has positioned himself as one of New Zealand's leading science communicators, utilising media such as his popular radio talkback show "Ruud's Awakening" and a range of television roles, as both a presenter and a narrator, to educate listeners and viewers about the importance of insects, and to challenge some popular misconceptions. He has written regular columns and articles for New Zealand's leading newspapers and magazines, and has published two books - "Scratching for a Living" in 1997, and "Backyard Battlefield" in 2005.
Recognised world-wide as an expert on ecology and insect behaviour, Indonesian-born Ruud who moved to New Zealand in 1978, has hosted internationally-syndicated television programmes for the Discovery Channel and Animal Planet, including "The World's Biggest and Baddest Bugs". He's also a regular on the Jay Leno show.
Ruud also works closely with researchers at the University of Waikato, to prepare material for his public and media presentations, and he has acted on the university's behalf as a science ambassador at events such as Fieldays.
He hopes his honorary doctorate will inspire young people to take up science as a career, and says he is looking forward to becoming even more involved with the University of Waikato.
Despite his busy lifestyle, Auckland-based Ruud maintains his research activity and stays at the forefront of his subject area. He regularly works as a consulting entomologist for Government departments and private companies, lectures on ecology and entomology, and is also deeply involved in New Zealand conservation efforts.
He is a trustee of Project Crimson; the Little Barrier Island Supporters' Trust; Bank of New Zealand Kiwi Recovery Trust; and the Zoo Charitable Trust; as well as being a patron of Keep New Zealand Beautiful.