What is it about Rob Hamill that makes him unstoppable even in the face of setbacks, protests and unbelievable pressure? His philosophy is as true for business as it is for sport. Don’t miss it! 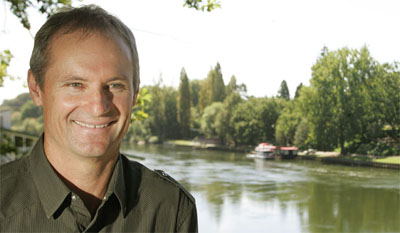 Rob rowed for New Zealand at the Atlanta Olympics and published The Naked Rower on how he and Phil Stubbs captured headlines around the world winning the gruelling and inaugural Atlantic Rowing Race in 41 days. He then led teams to successful defences in the next two editions making it a three-peat of victories for New Zealand.

Rob has spoken to over 100,000 school children throughout New Zealand to help them aspire to reach their goals. He is co-organiser of The Great Race, an annual rowing 8s clash between Waikato and Cambridge/Oxford/Harvard/Washington Universities on the Waikato River. His latest project was managing a rowing expedition across the Tasman Sea that was completed last year and a related campaign to build the world's largest human made coral reef.

The next project is the inaugural Pacific Rowing Race.

Rob was recently the narrator-protagonist of the award-winning documentary Brother Number One, which recounts the story of his return to Cambodia to retrace the steps of his brother Kerry, tortured and murdered by the Khmer Rouge.

Rob's account is a powerful and inspiring message on ambitious goal setting, tenacity, hope, love and the last human freedom: the power to choose your attitude and how you respond to any given situation.

The humour, the insights and the emotional turning points have audiences spellbound while the use of an amazing audiovisual show help make the audience feel part of the challenges.

Rob will inspire you to pursue your dreams whatever they may be, to take on new challenges, overcoming hardship against the odds and know that with passion anything is possible.

It doesn't hurt to be just a little bit crazy too!