Sir Richard Hadlee was voted the New Zealand Sportsperson of the Decade 1987 for his contribution to cricket. He took 431 test wickets Played 86 test matches and 115 one-day internationals and had a Test Bowling Average of 22.29 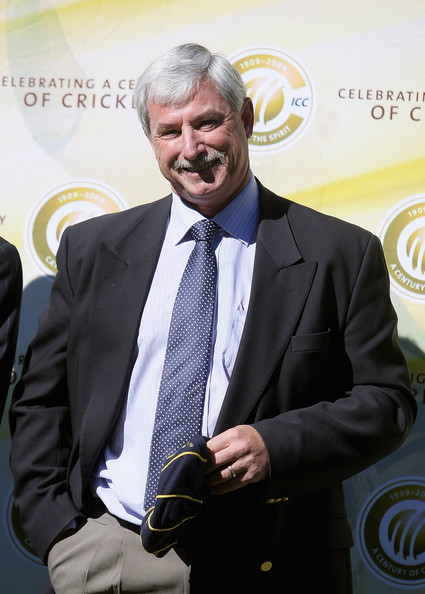 Aptly desribed as "The Master of Rhythm and Swing", Sir Richard Hadlee is New Zealand's greatest cricketer. Internationally, he competes with Ian Botham, Kapil Dev and Imran Khan for recognition as best all-rounder and with Dennis Lillee for recognition as the greatest fast bowler ever. He built up this reputation with more than 400 test wickets to his credit.

In 1989 he signed 25,000 copies of his book, Rhythm and Swing, and achieved 396 test wickets. For his consistently brilliant performance over the whole decade, he was awarded overall "Sportsman of the Eighties".

He retired from international cricket in 1990 and he was fortunate to get a wicket off the last ball that he bowled in test cricket. He was knighted just after he finished his cricketing career for his immense contribution to the game of cricket.

Sir Richard remains involved with the game even after he retired from international cricket. He served as Ambassador of the Bank of New Zealand for their cricket sponsorship. He also accepted the role of chairman of New Zealand selectors and since 2000 has been a selector for the Black Caps.

His presentations are witty, articulate and full of rich anecdotes from his playing career. The many confrontations with the best cricketers in the world are bound to produce memorable stories from the playing field and Sir Richard shares them with the best.

•In December 2002 he was chosen by Wisden as the 2nd greatest test bowler of all time.
•Became the '12th Best cricketer of All Time' in ESPN's Legends of Cricket.

•Awarded an Honorary Doctorate in Letters from the Nottingham University, England, 2008.
•Awarded the Bert Sutcliffe Medal for Services to New Zealand Cricket in 2008.
•In March 2009 he was commemorated as one of the twelve 'Local Heroes of Canterbury' and a bronze bust of him was unveiled at the Christchurch Arts Centre.

•Inducted into the ICC/FICA World Cricket Hall of Fame in April 2009.
•Awarded the 'Altiora Peto' Medal from the High School Old Boys Association (Christchurch Boys High School) in 2009.
•Inducted to Life Membership of New Zealand Cricket in 2010.
•Inducted as a 'Canterbury Sporting Legend' in 2010.
•Became a 'Bradman Honouree' at the Bradman Gala Dinner in 2011. Also inducted into the International Cricket Hall of Fame (as one of the legends of the game) at the Bradman Museum in Bowral, Australia.
•NZ Cricket named 'The Supreme Cricketer of the Year Award' as 'The Sir Richard Hadlee Medal' in 2011 (this award compares with 'The Allan Border Medal' as the Supreme Award for Australian cricketers).
•'Brand Laureate Legendary Award 2015' from the Asia Pacific Brands Foundation for services to sport and being an excellent role model.