With over 100 criminal convictions cycling has turned his life around. 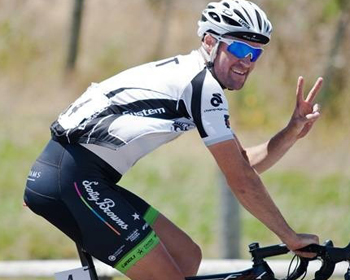 Reon Nolan's tale of convict to cyclist has been well told, it's an inspiration for many, but now the Christchurch cyclist isn't about just being in the race, it's about winning.

He tells the story of how his life spiralled out of control, how as a youngster it was about avoiding home and doing things that made him feel good about himself, be it sniffing glue, drinking to excess or taking drugs. That path turned sour with stints in jail and failed rehab attempts before he picked up a bike and finally felt like he was an insider, not an outsider.

He now rolls with the most popular boy in town, having been taken under the wing of World Tour rider Hayden Roulston and his sponsors Trek, as the addiction counsellor prepares for a shot at the World masters championships in Perth next year.

"That's what Hayden is helping me with, to get me there . . . I'm not saying I'm going to win it but I tell you what I'm going to be ready on the start line and do everything I can to do the best I can to be amongst it and be there at the end."

Speaking about his first foray into stage races at the Tour of Southland three years ago, Nolan said he was determined not to give up during what was one of the hardest times in his life and despite the huge acheivement of making it to the start line, he felt ashamed of finishing dead last.

"It was like a journey, that whole Tour of Southland, it changed me forever. It gave me the motivation and dedication to get back and not come dead last."

He's the first to admit in those early years he took a kicking in the races he entered, but he's built his confidence and now he's mixing it up at the front. He got his breakthrough in 2014 when on day three of Southland he finished third at Te Anau behind two professional riders, Fraser Gough and Thomas Stewart.

"To get to the end and be able to compete for a stage win was a pretty good feeling. I was disappointed I didn't win, but just to be there with those guys from where I was [when] coming dead last was a dramatic change, it was pretty cool.

"Now I just look forward to being in [that] situation again and to do everything I can to learn from that and take it to every other Southland I do."

Roulston has taught his pupil how best to train and master the bike when you have to also hold down a day job. How to maximise your training in short bursts, and how to stay positive and mentally fight on the bad days.

"I used to think that riding my bike was doing five hours every day and doing eight hours on Saturday and seven-hour days on Sunday, y'know.

"[Hayden] has shown me that you can have a job but still train, and race the best guys and compete with them, that's the main thing. He's given me lifestyle balance, but the main thing he's given me is the belief in myself and [to] back myself."

Nolan will be riding in Le Race at the weekend, as road captain for the TotalPos team he's got to plan how they race a tactical 100km from Christchurch's Cathedral Square to Akaroa. He's moved from a position of learning the basics, to being a tactician and leader on the road.

"They're more scary, the one-day races because all your energy is focused on those 100kms. Especially because thereis 4km of flat and then just a hill. If you haven't got your warmup right you'll get blown out, if you've still got food in your stomach that's going to cause an issue.

"If you're not in the first 10 on the hill and you're starting 30 back, you've lost a minute, two minutes already to the front guys and then that's hard to recover."

If Nolan picked up a bike at first to feel accepted and good about himself, these days the motivation is winning for all the people who've backed him to this point. He might regret not getting into cycling earlier, but he's making the most of it now.

"For me that's what cycling's about, the happiness and acheivement of winning. We're just doing the best we can."