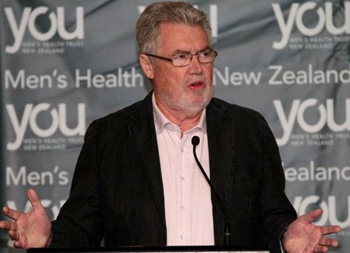 It will be the fourth book the prolific writer has published recently. The sellout Rugby World Cup book Cup Glory was released three days after the cup final, and in 2012 came Rivals, a look at fierce battles in sport. Making Champion Men is the inspirational story of how former boxer Billy Graham is transforming boys' lives, and, to cap it all, Valerie is the full, astonishingly revealing story of how a 13 year-old barefoot kid from Mangere grew up to rule the world of shot putting.

Valerie is Phil's 19th book. In total his books have sold a quarter of a million copies.

Awarded the 2010 SPARC lifetime achievement award for services to sports journalism, he has reported on every Rugby World Cup since 1987, covered every rugby test in New Zealand since 1977, and reported on rugby in Great Britain, Ireland, France, South Africa, Argentina and Samoa.

He has hosted number one shows at Radio Hauraki in Auckland, and 91ZM and More FM in Christchurch, winning 12 New Zealand and two Australasian radio awards.

He created in print a satirical rugby character, Loosehead Len, a column that ran for 32 years from 1973, and continues to write a weekly column in the Sunday Star-Times.

Phil Gifford is an in demand conference MC and speaker!

Lords of the Game: The Greatest Rugby Matches in the Players' Own Words

The Passion: The Stories behind 125 Years of Canterbury Rugby