Peter Williams one of New Zealand's most respected broadcasters 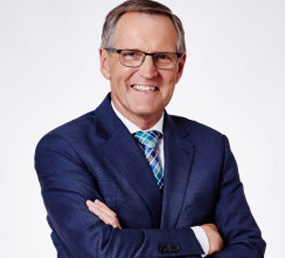 After more than forty five years in the broadcasting industry, Peter Williams is one of the best known and most respected faces in the country.

In 2017 he featured again high (2nd place) on the Readers Digest list of New Zealand’s most trusted journalists and broadcasters.

In previous years Peter has twice been voted the country’s Best Newsreader by the readers of TV Guide and has regularly garnered industry awards for his work.

After starting his career in Dunedin radio, Peter has been an integral part of TVNZ since the late 1970s. Originally he was the face of their sports coverage and was presenter of prime events such as Olympic and Commonwealth Games, rugby and cricket tests and awards shows.

Peter then moved into news reporting covering sport and also spent time as the One News Australian correspondent.

For the past twenty years he has been an anchor for One News during Breakfast and 6pm shows, while often reverting to his role as a reporter at significant events.

He is currently the presenter of One News weekend edition, regularly the country’s most watched TV show with a daily audience in excess of 700,000 viewers.

In 2016 he hosted a successful revival of the high brow quiz show “Mastermind.”

Peter’s vast experience therefore makes him ideal to be the frontman and Master of Ceremonies for your special function, but he also has a career’s worth of experiences he could share with you from some of the great sports events of the last thirty years.