When Peter Hillary climbed Mount Everest in 1990 he and his father, Sir Edmund Hillary, who was the first to conquer Everest in 1953, became the first father and son to achieve this remarkable feat 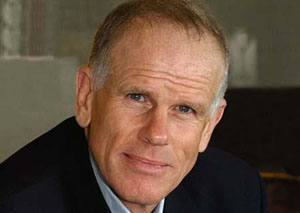 Peter Hillary is an articulate and inspirational speaker who specialises in motivational keynote and conference presentations on challenges, change, achievement and survival.

Peter Hillary's life is a testament to setting goals and achieving them. His skill, driving ambition, and good judgment have enabled him to summit mountains and survive ferocious storms and avalanches. He is a powerful communicator, a gifted storyteller and a skilled assessor of what works and what doesn't in critical situations.

With a history of world class achievements in climbing, he is an inspiring adventurer from one of the great families of mountaineering. Like his father, Sir Edmund Hillary, who made the first ascent of Mt Everest in 1953, Peter has summited Everest (making them the first two generations of one family to do so) and reached the South Pole on skis, forging a new route across Antarctica. The names Everest and Hillary are forever linked, and Peter continues to climb in the Himalayas and raise funds to support schools and hospitals for the people of the Everest region in Nepal.

In his enthralling presentations, Peter Hillary reveals what it takes to summit Mt Everest, the world's highest mountain, (twice!), to travel to the ends of the earth at the North and South Poles and to survive an horrific storm on 'the savage mountain': K2. All include dramatic video footage.

Peter is a dynamic and easy speaker, with a dry wit and a flair for storytelling; he has spoken to audiences ranging from 12 to 12,000. He captivates audiences with authentic, spine-tingling and at times hilarious stories about his adventures, who find themselves transported to a world far away. Peter's own challenges are a metaphor for the process of achievement of goals for any individual. His message focuses on the importance of preparation, perseverance, teamwork, caution and good judgment - as well as, importantly, enjoying the journey. He leaves people charged, motivated and raring to go.

Giving something back to the people who provided assistance to the Hillarys on their climbs, Sir Edmund and the Hillary family has built and run 42 schools, hospitals and medical clinics among the subsistence farming villages at the Khumbu Valley at the foot of Everest. Nepal, the country in which they are situated, is one of the poorest countries in the world. Peter, like his father before him, is motivated by the belief that 'to pursue your own goals is great, but it is even greater to help others reach theirs'.

Throughout each of Peter Hillary's speeches are the following powerful, recurrent themes...

- Nothing ventured, nothing gained: all achievement involves risk;
- Resisting the 'flock factor': teamwork is essential for success, but not at the cost of individual judgment;
- Self-reliance: trusting in your own intuition;
- Communication: critical for getting your message across; and
- Passion: teams thrive with people who are passionate, skilled and confident.