Nigel Latta is a registered clinical psychologist and author. Born and raised in Oamaru, he spent his high school years at Waitaki Boys High School, then went on to Otago University – where he completed an MSc in Marine Science. 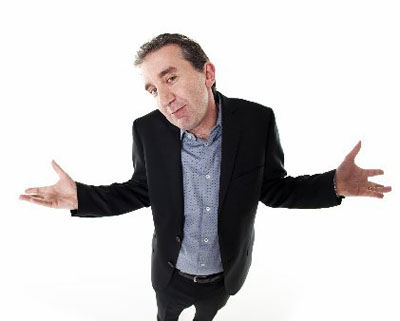 “Mind Over Money is the entertaining and enlightening result. It’s been wonderfully rich pickings because we’re using our stone age brains which were never designed to deal with complex abstract decisions about money. Is it any wonder it can go pear-shaped for so many of us,” he says.

Nigel is the second oldest of a family of four and was born in Oamaru on the East Coast of the South Island of New Zealand. Oamaru was, he says, an “interesting” place to grow up. At age eighteen he left home to study at the University of Otago gaining a Bachelor of Science in Zoology, and then a Master of Science in Marine Science.

In 1990, whilst he should have been working on his marine science master’s thesis, he had a brief foray into the world of rock and roll, playing and touring with the world-famous-in-some-parts-of-Dunedin Gavin Thornton’s Steam Injected Band. This was a six-piece skiffle band (ukulele’s, tea-chest bass, washboards etc). Gavin’s was huge on the Dunedin busking scene and their gigs included the Telethon bomb scare, the Otago Daily Times Children’s Christmas party, the Alexandra Blossom festival, and a pub in Invercargill. The band broke up following a wildly successful South Island tour on the 1st of January 1991.

At this point he faced a tough decision: either get a real job or find something else to study. It’s no surprise then that he subsequently enrolled at the University of Auckland to train as a Clinical Psychologist. He graduated with a Master of Philosophy with First Class Honors in Psychology, and a Postgraduate Diploma in Clinical Psychology.

His professional experience to date spans over two decades and reflects a dual interest in both forensic psychology and working with young people and their families. In recent years he has developed an increasing speciality and passion for working with kids in the ‘too-hard’ basket.

Nigel, in private practice for the last seventeen years, has finally accepted the fact that working in organizations just wasn’t for him. The deciding factor was sitting in a staff meeting so inane and trivial that he found himself wishing for death. This, on reflection, didn’t seem like a great way to spend his time.

In addition to working with literally thousands of families over the past seventeen years, he also consults with a range of private and public organizations from throughout New Zealand including social service agencies, sex offender treatment programs, prisons, the Department of Corrections, the New Zealand Police and Child Youth and Family Services.

His career as a broadcaster began with the critically acclaimed "Beyond the Darklands", produced by Screentime in New Zealand, which ran for five seasons. He presented the top rating "Politically Incorrect Parenting Show" with Razor Films, and this was followed by "The Politically Incorrect Guide to Teenagers", and then "The Politically Incorrect Guide to Being a Grownup". He also filmed an Australian version of the parenting show for Channel Nine. He presented "After the Quake", a documentary exploring how to help children and young people cope with natural disasters, and "Surviving Teen Drivers", a two-part documentary about how best to support young drivers.

He has recently completed filming the documentary "Cold Science", two one hour episodes looking at life and science in the Antarctic which will screen in 2014, a six-part major documentary series looking at the big social issues of our time, which should also be screening in 2014, and is about to start filming an eight-part popular science series called "Nigel Blows Stuff Up".

In 2010, as a result of his passion for science and science education, Nigel was invited to become an associate of the world leading Multidisciplinary Health and Development Study at the University of Otago. In 2012 he was made an Officer of the New Zealand Order of Merit (ONZM) for services to psychology.

He continues to work with families, consult with organizations and speak at conferences both in New Zealand and abroad.

In 2016 his TV documentary; "The Hard Stuff with Nigel Latta" drew critical acclaim.

Later that year, Nigel and two of his colleagues who were instrumental in the making of many of these documentary series, started a production company called Ruckus Media, which produced ‘Mind Over Money’ which dealt with the psychology of money, ‘What Next’ with respected broadcaster John Campbell and most recently ‘The Curious Mind’, a series on neuroscience

What makes the difference between winners, and losers? The psychology of success is a topic that generates a lot of hype and a lot of self-help books. Is the answer to simply repeat "I'm a tiger" twenty times each morning? Is it a high protein diet? Or maybe it's harnessing the cosmic powers of the universe to call success into your life? Or maybe it's really all about beating the 'self-sabotage' scripts in our heads which secretly work to keep us down?

In this presentation, l'll look at the actual science to see if in amongst all the modern hoop-de-doo there may be one or two pieces of information that are actually useful in the real world. It turns out, as with most things, that the answers are simpler than you might imagine--not necessarily easier, but certainly simpler.

Still... you also need to make sure that you're chasing the right monkey because not all monkeys lead to Rome.

Leadership is something we all hear a lot about but tend not to see quite so much. Like many things in life we've tended to make it far more complicated than it really is. To put it bluntly, leaders lead. That's what they do, and the great leaders do it extremely well.

The trick is not to get hung up on the idea that leadership is a bunch of tricks, that it's some kind of script or recipe that can be learned and replicated. It isn't, and you can't. Gimmicks and catchphrases don't work in the real world. The truth is that leadership, like every human interaction for the last 200, 000 years, is a co-operative venture, it's a social compact between the people at the front, and those following along behind. Leader's lead, but it is equally true that followers follow.

So maybe the real question isn't so much about how do you lead--after all that just requires you to walk the fastest--but rather how do you get people to follow?

Human beings weren't really designed for change. Most of our time here on this little blue-green planet has been a much simpler, much less complex affair. For a long time, there were no staff meetings, no building inspectors, no talent shows, and no smartphones. We were born, we hunted, gathered, reproduced, hunted a bit more, and died.

Our lives are far more different, and in fact, they're even far more different than that of our parents. In this globalized, hyperconnected, market-driven world that we all live in now, it's not about whether you like change or not, because the truth is it's change or die. Constant change and adaptation is the only way businesses can survive now, and so bringing all the people in that business along with the change is fundamentally important.

In this presentation I'll show you what all this has to do with ukulele's and helicopters, how neuroscience can explain why change is often so difficult, and provide a few simple pointers so you can help the people you're travelling with to survive and thrive in a world where constant change is the key to everything.

People can be difficult, and some much more than others. In fact, some people are so good at being difficult that they make everyone else's lives a misery. All of which begs the question why are some people such hard work? And perhaps even more importantly, how does one manage such a person if you're unlucky enough to get stuck with one.

Much of my clinical work has been with more angry teenagers than you could fit in a mid-sized container ship, and grownups who've been so difficult many of them ended up serving prison sentences. In truth, I'd far rather deal with difficult people than 'easy' people because it's the difficult ones who force you to play at the top of your game.

In this presentation, I'll show you what science has revealed about the psychology of being difficult, reveal some surprisingly good news courtesy of grumpy nuns, and provide a few simple tips for dealing with difficult people. All that and a picture of a very angry cat.

In many respects, I've led a decidedly unlikely life. I've spent my professional life working at the ragged edges of the human condition, and in more recent years as part of my television career, I've literally been to the edge of the physical world as well. This wasn't something that happened by accident, it was my conscious intent from the very beginning. I have deliberately sought "the road less travell'd" to see what there was to see and to learn things that I could never learn on more conventional paths.

In this session, I'll tell you the story of how and why I got to here... the good decisions and the bad ones as well. I've seen death and tragedy close up, I've shaken hands with some of the worst people you could ever hope to find, and I've seen things that were almost too much to bear. But I've also met truly amazing people who have inspired me and stood in places that are beautiful far beyond words.

Most importantly, I'll share with you some of the lessons I've learned about getting where you want to go... even if those places are unlikely.

For many of us, the idea of a work-life balance seems like an unattainable myth. How on earth are we supposed to keep the pressures of work, and the pressures of the home in balance? Often it seems like the harder you try the harder it becomes. There's increasing pressure on all of us to pay our increasing bills, but we're also supposed to put all of this time into our families as well.

In this session, I'll give you my take on how you can keep all this stuff going. It's not easy, but it's just might be easier than you think. As long as you keep sight of a few basic principles then you should be okay.

Once you understand how our brains and bodies react to stress, and how all of that can make it difficult to prioritise and get things done, then it all becomes much clearer.

It seems like a pretty big ask, right, saving the world? A lot of people wouldn't really think it's business' job to save the world either.

In fact, the opposite is true because business can save the world, and it really is the business of business. After all, you can have the greatest product in the world but if the actual world is buggered, and your customers are all broke, then you don't have many options left.

In this address I'll tell you why the world needs saving, and what we all can do about it. The good news is that you don't have to go round hugging trees and singing folk songs (well, you can if you want but probably best to do that on your time and not on work time). Instead, we'll talk about what's going wrong, why we need to change that, and what can be done.

I'm also going to show you how companies with an environmental and social conscience are going to be the big winners in the new world economy.