"Nick Nickolas is one of the finest comedy/illusionists in the world" So say his peers and anyone who has had the privilege of experiencing this incredible performer. His cheeky demeanour and audience interaction always ensure a wonderful show. 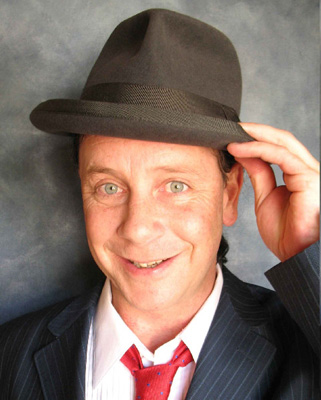 There are MC's/magicians/illusionists and then there are comedians but nobody combines the two like Nick Nickolas. Nick is an amazing performer. He has the audience eating out of his hand as he does illusions that amaze and confuse everyone - including Nick. None of his illusions seem to work very well - or do they?

Born in London in 1967 within the sound of the Bow Bells Nick started his entertainment career doing magic on the streets of East London at the age of 17. He arrived in New Zealand in 1992.

In 1994 he was "discovered" by Gary McCormick, one of New Zealand's top TV celebrities, and invited to become a member of the highly successful peak viewing New Zealand Television series "Give Us a Clue" with Brian Edwards and Belinda Todd.

Nick has now well and truly established himself as one of the finest comedy/illusionists in the World. His MC roles and after dinner routines for corporate conferences are legendary. Audiences are still recovering. Before or after the event Nick will even do some close up magic with the audience, at their tables, time permitting.

Having cut his teeth on the toughest stage in the world, the street, Nick can handle any kind of audience and even his peers rate Nick as "the best". In his corporate presentations Nick uses all his skills, from close up magic to illusion laced with comedy to make his point and the audience just loves it.

Either as an after dinner speaker or MC, Nick is in his element and converses with the audience in such a manner that if someone's not laughing hysterically, check their pulse - they may be dead. Whether you're looking for someone to act as MC, do a stint during your event or do the after dinner, Nick is the ideal person.

MAGICIAN Combining amazing sleight of hand, comedy, gags and absurdities, Nick Nickolas gives the old tricks a new twist. Audiences are either on the edge of their seats in anticipation, leaning back and laughing, or somewhere in-between. Nicks’ skill with tennis balls, rope, sausages, and cards has seen him perform for the Harlem Globe Trotters, open up for George Best and he’s the only act ever to support the Dali Llama. Audience participation at its best, crack hot magic and crack hot gags, Nick’s a quality magic act for any situation.
WINNER- Most Entertaining Act - Australian Magic Championships.

COMEDIAN As a comedian Nick is very "quick on his feet" which makes for a great compere. He’s constantly aware of his surroundings therefore ready to cover those, oh so unplanned glitches at the drop of a hat, to make any event run smoothly.

"This is the third time we have used Nick as our MC and we'll probably use him again. Unbelievably good!"

"We heard Nick was a great performer but nothing prepared us for just how good he is. Not only are his illusions mind-blowing but his whole performance and interaction with the audience is so good! Thank you Speakers New Zealand"