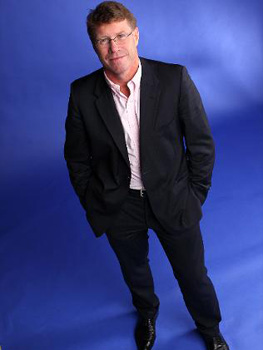 Nick Farr-Jones is a natural leader and, as an amateur sportsman, has uniquely experienced over 2 decades working in a business environment. He has led both world class sports people but has also been intricately involved in executing global business plans, strategic development and motivating people to achieve, individually and collectively, their objectives and dreams.

Nick can encourage and motivate those who weren’t gifted with outstanding natural talents. He was not selected to play in his school’s rugby 1st XV in his leaving year. But his passion to “not die wondering” burnt in Farr-Jones’ heart and whilst studying law at Sydney University he joined the University’s infamous rugby club and was soon thereafter selected to represent his nation in 1984. As Farr-Jones says, “ there was a fair bit of blood, sweat and tears in getting to the top but like anything, success worth achieving is always preceded by many hard yards”.

In rugby circles Farr-Jones was capped for Australia for 10 consecutive years, never being replaced during this time. He captained the team for 5 of those years including leading the country in 1991 to rugby’s holy grail, the Rugby World Cup. His leadership was recognized in being chosen to captain the Barbarian Club to celebrate the famous club’s centenary celebrations in 1990 and the World XV during New Zealand’s centenary celebrations in 1992. He was awarded an A.M. in 1992 for services to the game.

During his time with the Wallabies Farr-Jones worked in the mid-sized Sydney legal firm of Garland Seaborn and Abbott. Shortly after sporting retirement he left the legal game pursuing a career in investment banking. He departed for Paris shortly after joining the French investment bank Societe Generale. After 4 successful years expanding the bank’s metal derivative business in Europe and Africa, Farr-Jones returned to Sydney in 1999 to head up the Australian branch of SocGen’s commodity finance business developing a highly motivated and well regarded team in the mining and commodity sector.

Farr-Jones left the banking world in 2008 and has taken up non executive directorships of companies largely in the resource sector. In 2009 he joined Taurus Resource Fund which specializes in investing in the mining and resource sector.

Nick is a former Senator of the University of Sydney, Director of NRMA, Councillor of the City of Sydney and Patron of the Children’s Leukaemia and Cancer Foundation. He is currently a Director of the Wesley Mission and recently created his own charity known as Touch Life raising awareness and funds to support Wesley’s work in the homeless space.

Above everything Nick counts the most successful and satisfying years in life as the daily interaction with his wife Angie and 4 children. He is an engaging speaker bringing world class sporting anecdotes and experiences into the realms of business life whilst encouraging and motivating individuals and teams.