Winner of “Female Comedian of the Decade” at the 2010 NZ Comedy Guild Awards, Michele A’Court is a fulltime professional stand-up comedian and freelance writer. 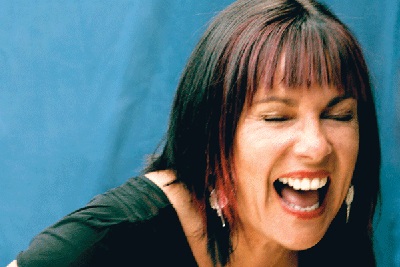 She has several years’ experience of performing at corporate functions as a host and entertainer. Michele presented the NZ Tourism Awards in 1998 and 1999 where her “professionalism, expertise and wit” as MC were acknowledged as “major factors in the success” of the events. Other clients have included finance brokers, travel companies, secondary school teachers, classical musicians, truck drivers, pharmaceutical companies and produce growers.

Michele has performed in a huge number of celebrity debates over the past six years including regular appearances for the Dunedin and Christchurch festivals, the Northshore Libraries Foundation, Plunket and the Peace Foundation - forging a place alongside the traditional “big guns” of Gary McCormick, Ginette MacDonald, Jim Hopkins and Tom Scott.

She’s also a comedian with a heart. Michele visited East Timor in March 2001 where she entertained NZ and United Nations troops - an experience she described as “life-changing and world-expanding”. In January 2002, Michele performed a special workshop and show for the teenage Afghani refugees rescued from the Tampa.

As a television scriptwriter, she has completed an animated children’s programme, “Tamatoa the Brave Warrior”, which screened in 2000 on TV2. She has also been a scriptwriter for Shortland Street, and has contributed to a number of television sketch comedy shows as both a writer and comic actor.

Television credits include: What Now?, the Video Dispatch, Pulp Comedy, Shortland Street, A Bit After Ten, Strassman, Kiwi Shorts, Letter to Blanchy, Issues, Comedy Central, That Comedy Show, Really Living, a regular slot in 1998 as a rugby reporter for Friday Night Football on Sky Sport, and an endless list of game shows such as Ready Steady Cook and Give Us a Clue.

Michele is the winner of the NZ Comedy Guild Awards as Best Female Comedian 2002 & 2003, Michele has been a regular on television’s Pulp Comedy for the past nine years. She hosted the Laugh! Festival Big Comedy Gala 2000 on TV2, has hosted the female comedians showcase Divas several times in Auckland and Wellington, and hosted New Zealand’s comedy Oscars, The Billy T Awards on TV2 in 1998. Her earlier work is currently screening on the Comedy Channel in Australia.

She’s a comedian with a brain. With a degree in English Literature and Drama (1983), Michele was for two years the Auckland Correspondent for Chris Laidlaw's "Sunday", and a regular book reviewer on National Radio's Nine till Noon programme; and with a NZ Certificate in Journalism (1979) she’s a freelance journalist for a number of national magazines and newspapers including Next, OnHoliday, and NZ Political Review.

What the Reviewers Say...

"The humour is modern, urbane, intelligent, inventive and irreverent – reminiscent of the best television humour in the days before satire was turned into homogenised, disarmed filling for the gaps between commercials… the pace, the timing, the variety, the polish and cheerful iconoclasm that make an evening of good comedy." – Otago Daily Times
"Relaxed and articulate award-winning comedian Michele A'Court brings an earthy perceptiveness to Robyn [Mum's The Word]… Her wartime rural grandmother's story is as compelling as her insightful observations are funny." – National Business Review
“Charming... enjoys nothing more than tweaking your pretensions and preconceptions... Brisk, breezy and over all too soon.” - Evening Post
“Tight, taut, and very, very funny.” - Bay of Plenty Times
“A’Court shot straight from the lip and came out swinging... clearly the crowd favourite.”- Otago Daily Times
“Sassy... confident... snide... outrageous and probably libellous...”- NZ Herald
“Comedy that packed a punch... One of the top shows of the Fringe.”- Capital Times
“Finally, a show that lives up to its publicity... Talented performer... perceptive student of the human condition.”- Daily Telegraph
“Hits the ground running a comical gauntlet of innuendo and punchy improvising that quickly builds a rapport with the audience.” - Dominion
“Has personality to burn...” - Capital Times
“Masterful... Willingness to tackle controversial political issues with confidence and flair... Seasoned and talented professional... What a good stand-up show should do.”
- Salient