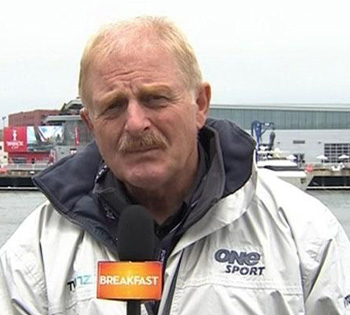 Martin Tasker is the ONE News yachting correspondent and provides exclusive articles for onenews.co.nz from the likes of the America's Cup and the Volvo Ocean Race. Martin was brought up by the sea in England and worked as a print and television journalist in Britain, Hong Kong and the USA, including 12 years as a reporter, producer and director for the BBC. He has worked for TVNZ since moving to New Zealand in 1993, covering his first America's Cup in 1997. Martin is an experienced sailor whose love of the sport has led him to cover all the major yachting events, from the Olympic Games in London, Beijing, Athens and Sydney to the Whitbread, Volvo, Global Challenge and solo round the world races. With colleague Peter Lester he commentated and reported from all ten ports in the latest Volvo Ocean race and his coverage of the Race's pit-stop in Wellington in 2006 won Broadcast of the Year at the TP McLean Sports Journalism Awards.

At the last America's Cup in Valencia, Martin commentated for ONE Sport and host broadcaster TWI, and filed stories for ONE News.

He's been at the America's Cup World Series in San Francisco where he'll be covering the 34th Cup for TVNZ in 2013.