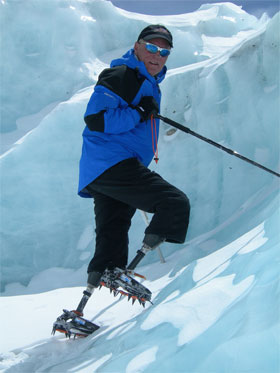 In the early hours of Monday May 15, 2006 Mark Inglis became the first double amputee ever to climb Mt Everest.
His story is one of setbacks, determination against the odds and personal success. His presentation is a "must hear" for everyone.

Mark lost his legs on Mt Cook but that didn't stop him from going back and conquering the mountain. In 2004 Mark became the first double amputee to summit an 8000m peak, when he climbed Cho Oyu (8,210 metres), the 6th highest mountain in the World. On June 5, 2007 his life was chronicled on the highly respected "This is Your Life" in New Zealand.

In August 2009 Mark was invited to the New York City to take part in the Creative Leadership Summit.He is the first New Zealander to be invited onto the panel and this is a huge honour.

His subject was “Education: Cognitive and Digital Tools for the Minds of the Next Generation”

Mark Inglis began work as a professional mountaineer in Mount Cook National Park in 1979. A Search and Rescue Mountaineer, in November 1982 Mark and his climbing partner Philip Doole were trapped in an ice cave near the summit of Mt Cook in a storm that lasted 13.5 days. Both men lost their legs through frostbite.

Challenged to "re-think" his career, Mark attended Lincoln University and graduated with a Bachelor of Science (Hons) (1st Class) in Biochemistry. After 3 year with the Christchurch School of Medicine, Mark joined Montana Wines and became a Senior Winemaker.

He also took up sport again, and returned to the outdoors he loved so much. He has competed nationally and international in Disabled Alpine Skiing, winning gold, silver and bronze medals.

In Disabled Road Cycling he represented New Zealand at the 1998 World Championships and won a Silver medal at the Sydney 2000 Paralympics (1000m Cycling individual time trial ).

In 2002 Mark achieved another long-planned goal - to step onto the summit of Mount Cook. In November 2002 Mark released his book No Mean Feat - detailing the extraordinary story of survival by Mark and his climbing partner Phil Doole, in an ice cave near the summit of Mount Cook. No Mean Feat tells the story of the ferocious storm that caused the men to be trapped and their situation throughout their days in the cave and their eventual rescue.

On September 27, 2004 Mark Inglis, climbed to the summit of Cho Oyu (8,210 metres), the 6th highest mountain in the World. On his 46th birthday too! All this in spite of a broken "leg" thus becoming the first double amputee to summit an 8000m peak. From the top of Cho Oyu Mark could see Mt Everest and determined that Everest would be his next quest.

Mark set out from New Zealand on March 25, 2006 to head for Khatmandu. You may like to read Mark's diary (broken leg and all) of what happened day by day after that by clicking here.

The rest as they say is history. On Monday May 15, 2006 Mark and his team reached his ultimate goal and stepped on the summit of Mt Everest at 8,850 metres.

We're all very proud of you Mark. You show us all what can be accomplished when you have a dream and the willingness to follow that dream to its end.

Mark is the author of three books; 'No Mean Feat’ ‘Off the Front Foot’ and ‘To The Max’