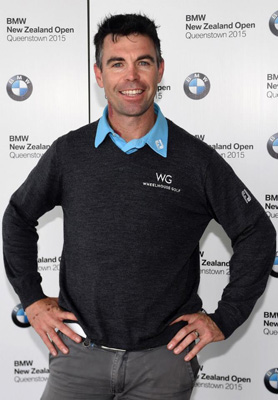 Marcus Wheelhouse is a former touring golf professional, now a teaching professional, who hosts corporate golf days, holds golf clinics and coaches all levels from beginners, to recreational golfers, right through to some of New Zealand's top amatuers and professionals.

He is also a television golf presenter/commentator having being the "on course" commentator for the NZ Open on Sky TV. He appears regularly on the ANZ golf show on Sky and spent over four years hosting a weekly radio show with legend broadcaster Brenden Telfer on radio sport. He writes a "Monthly Tips" article in NZ Golf Magazine.

Marcus started playing the age of eight and has enjoyed plenty of success.

He was ranked number one amateur golfer in the world in 1995 and consequently was awarded Auckland sportsman of the year.

He'd won over 31 amateur tournaments including being the only player to defend the New Zealand strokeplay championship in 93-94.

The Aucklander was a member of the New Zealand Eisenhower trophy team in 1994 and won six times overseas including the Malaysian amateur and the prestigious Lake Macquarie championship in Australia.

Marcus turned professional in January 1996 and was named rookie of the year on the Australasian tour after which he played in Europe for five years on the challenge tour.

From there Marcus changed tack and went to the USA to play on the Nationwide and Mini tours. After an injury in 2006 he returned home in 2007 to regroup but again changed his outlook and started to teach the game whilst finishing a full qualification as a class A PGA member.

Marcus is now coaching some of the best upcoming players in the country including Ryan Fox, Fraser Wilkin and Daniel Pearce, as well as recent Under 17 national champion Tadhg Campbell.

He is also the Tour player representative on the NZPGA board and still plays in varied Pro Am events.

In his presentations Marcus talks about his career in general and the pressures of sinking that vital putt and the mind game that is golf, in particular. He uses golf as a metaphor for the "playing field" the audience works in be it business, family or personal growth.

The 40 year old lives in Auckland with his wife Melodie Robinson and two young children Jenson and Freddie wheelhouse.