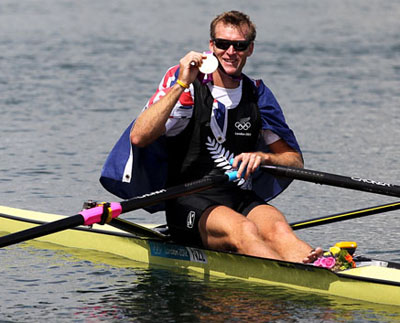 This came on the back of Mahe winning Gold in the single sculls at the Rio Olympics.

2012 Olympic flag bearer for New Zealand Mahe Drysdale won gold in the men's single sculls at Eaton Dorney at the end of the first week of the London Olympics.

More recently, Mahe also was awarded two silver medals for the men’s single scull and the men's lightweight four at the 2014 World Rowing Championships in Amsterdam.

Mahe is an inspirational athlete - winning back to back World Championship titles, and representing performance and endurance at its best.

His epic battle with Olympic Champion Rob Waddell won him the hearts of many New Zealander's for his courage and humility.

He so clearly displays the genuine traits of working hard to be the best and dealing honestly with what is dealt to you.

Mahe offers a sense of confidence and stature that resonates with all manner of audience. He is a timeless athlete who embodies all the traditional qualities of patriotism.

Mahe is a great addition to any conference or event, with inspirational messages from his sporting success