Lynn Paterson says there is no age barrier to living your dream, which for her is kayaking more than 5000 kilometers while raising awareness of mental health issues. 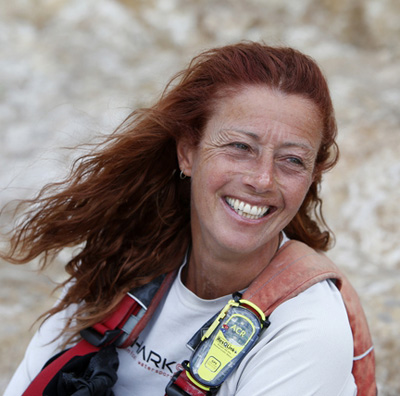 Lynn Paterson, aka Red, is the first person to have completed a solo 5,800-kilometre circumnavigation of New Zealand by sea kayak in one fell swoop - a feat that has been compared to the climbing of Mount Everest. The fact that a great many more people have succeeded in that ascent (over 5,000) than those who have even attempted to kayak round this country’s coastline (a mere handful), speaks for itself.

When Lynn told people what she was planning to do, the usual response was, “Are you crazy?”

Although she considers herself remarkably sane, one of the aims of Lynn’s endeavour was to raise funds for and focus attention on the amazing work undertaken by the Mental Health Foundation of New Zealand.  Another aim was pursuit of a long-held dream. The fact that she succeeded on both counts put paid to any who may have doubted either her ability or her intentions.

Lynn doesn’t beat about the bush. Her strongly-held belief is that physical exercise is the best medicine for most ills - mental health, in general, and severe depression, in particular, being current scourges of Kiwi society, often aided and abetted by the use of drugs and alcohol.  She knows what she’s talking about because she has a son who suffers from depression and, according to her, the greatest toll is often not on the individuals themselves but, rather, on family and other carers.  Unashamedly, Lynn belongs to the school of hard knocks and what better way of proving that theory than to apply it to herself?  By breaking down what may, at first, have seemed a totally unachievable journey into smaller segments, taking it day by day, paddle stroke by paddle stroke (3,000,000 in all) she was eventually able to fulfil her dream.

It was far from easy.  For eighteen months beforehand, with the help of a trusted coach, she undertook a punishing training schedule – rising very early each morning, six days a week, to run, swim and paddle, to practice mind and body-numbing Eskimo rolls and to do gym workouts before going to work as a Project Manager with an events company by day.  At fifty-three years old (when some people might be looking forward to retirement) she gave up a comfortable home life and a steady job.  She sold some prized possessions and used her life savings to buy a couple of sea kayaks, as well as a campervan to be used for on-land living arrangements and to act as back-up transport. She had to find sponsorship for kayaking and navigational equipment, mobile phones, clothing, food and fuel. But she was nothing if not determined. She listened to the sage advice of valued mentors.  Not least, there was her support crew - drawn partly from among close friends and partly from total strangers found on the international Woofers network on the Internet - without all of whom she’s the first to acknowledge she couldn’t have done what she did.

With Mother Nature’s cruel intervention, what started out as an estimated 180-day journey, ended up as a 432-day odyssey.  Over seven hundred people followed RedzNZJourney – her daily Blog on Facebook.  Along the way, she:

Whether you’re looking for a motivational speaker or an after-dinner entertainer, Lynn will deliver the goods with brutal honesty, self-effacing humour and down-to-earth common sense. She combines psychology with physicality, sharing skills, strategies and techniques that can be applied both to everyday life and to work, with a presentation style that can be adapted to the needs and wants of any audience.