With co host Paul Henry, Kay Gregory was the popular host of TV One's high rating "Breakfast" since 2005. Kay earned her "spurs" by learning television skills from the ground floor.

Kay's television career started in 1994 when she became a newsreader and current affairs host for regional channel Coast to Coast in Hamilton.

In 1996 she joined TV ONE News and hasn't looked back. During her time with ONE News she has reported from the Solomon Islands, from Fiji post-coup and has spent a large amount of time standing talking to cameras from various floodwaters around the country! Nobody likes the weather but Kay became a very popular edition to the weather team. 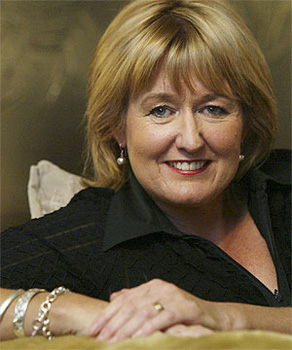 Kay's says her role as weather presenter was the ideal job as it combined her love of journalism and presenting. Getting it technically correct is something that Kay is passionate about.

She was a natural and obvious choice for the highly sought after Breakfast slot.

Kay briought experience and enthusiasm to the breakfast host role, and became one of the most popular and energetic journalists and presenters on television.

Kay left TVNZ in August 2007 to focus on her family and other work commitments. Since 1997 Kay has balanced her family life and television career between her home base in the Waikato and TVNZ's studio in Auckland.

"I would also like to be able to do more public speaking and freelance writing without the tiredness that comes from getting up at 3.30 in the mornings five days a week."

Kay will continue her involvement with various charities, including the Parkinsons Society and Breast Cancer Foundation, and as an Ambassador for Dress for Success, a charitable trust aimed at helping women back into the workforce.

In her spare time, Kay just keeps on talking! She's a member of International Training in Communication which involves giving speaking seminars, and is also a Marriage and Funeral Celebrant. If you would like Kay to conduct your ceremony.