Former All Black coach, speaks on management, teamwork and leadership 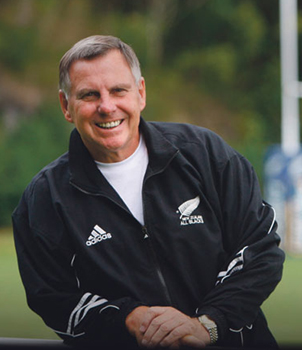 For most New Zealanders, John Hart's name is synonymous with rugby and the All Blacks; but his professional life also includes expertise in business leadership, management and human resources.

John played a major role in the New Zealand Rugby scene in the period 1987-1991 as an All Black Selector and Coach. He is widely acknowledged as the architect of New Zealand's pre-eminence in Rugby in the late 1980s. His motivational, man-management skills and vision have been recognised worldwide.

In April 1995 he was a consultant to SKY television in their bid to provide a professional Rugby competition in the Southern Hemisphere. His first best selling book, 'Change of Hart', includes a first-hand account of the successful transition of world rugby to a professional sport.

Later in 1995 he was appointed All Black coach and silenced many critics with two successful seasons and the first ever series victory in South Africa in 1996. The following year the National Business Review voted him New Zealander of the Year. He retired in 1999, after the Rugby World Cup, with an 85% winning record in all first class matches he coached.

John is a director of the New Zealand Warriors and a number of companies and organisations. He currently provides consulting services to a number of leading business organisations, covering fields such as Human Resources, Leadership, Marketing and Change Management. His experience in business and sport – given both the highs and lows he has achieved – give him a unique perspective on the essentials of success.