Young entrepreneur Jake Millar is a start up sensation - taking the world by storm! He is the Co-Founder and CEO of Unfiltered, his second startup in the past two years. 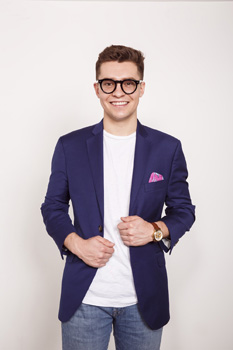 A born entrepreneur, Jake was selling magnets outside his local supermarket from the tender age of seven!

Tragedy hit when Jake was only 15-years-old and his life changed forever. His father died in a skydiving plane crash in Fox Glacier when the family’s FU24 aircraft smashed into the ground shortly after take-off, killing all nine people on board, including four of Jake’s close friends.

Jake says it was the Prime Minister’s influence that truly changed his life and it was following his influence that Jake realised the importance of having role models and mentors in your life, something he says he is “incredibly excited about seeing Unfiltered provide other aspiring entrepreneurs and business leaders.”

At the end of 2013, inspired by Sir Richard Branson’s autobiography “Losing My Virginity,” Jake said “Screw It, Let’s Do It,” turning down a $40,000 Law scholarship offered by the Dean of Law at the University of Otago, sold his car, and founded OOMPHER, his first start-up.

Jake interviewed 135 of New Zealand’s most successful people within one year, finding out how they did it. OOMPHER covered all sectors and Jake interviewed people such as Kiwi comedy legend, Rhys Darby; Air New Zealand CEO, Christopher Luxon; fashion superstar, Dame Trelise Cooper and many more.

Within two months of launching, Jake was already negotiating the sale of OOMPHER to the New Zealand Government, with Crown Entity Careers NZ acquiring the company.

Determined to get out there and give it another go in September 2015, he had co-founded Unfiltered.

“I have a passion for telling stories that haven’t been told before. This is what Unfiltered is about.”

When Jake’s not working, you’ll find him eating, reading, thinking, traveling, playing golf or probably… working, because he’s always “on…” This is something, he says, he admires the most in the greatest entrepreneurs he’s interviewed. 'You’ve got to be fully committed. You can’t get lazy. It’s 24/7. Business is the ultimate sport. It’s always on. As soon as you get lazy you’re screwed.”

Jake is truly inspirational and if you are looking for a speaker who will motivate, provoke thought, challenge you to dream big, and to provide real insight on how to create success then Jake is your man!