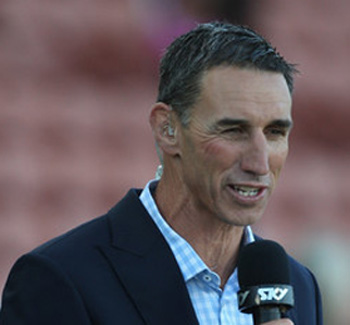 The 'Kamo Kid' Ian Jones is in high demand as one of the nations leading Rugby speakers.

Ian is the second most capped All Black of all time. He has 79 test caps and Sean Fitzpatrick is the only All Black with more caps, on 92. Jones is also the most capped second row in the history of the game of rugby.

During the 1920’s, Ian's great grandfather played for New Zealand. His name was ‘Bunny’ Finlayson.

1990 saw Jones make his debut for the All Blacks, against Scotland at Carisbrook in Dunedin in which he scored a try.

In 1996, also at Carisbrook and also playing against Scotland, he celebrated his 50th cap with another try. Jones comes from the Whangarei suburb of Kamo at the top of the North Island, and has always been known as the ‘Kamo Kid’. He played his Super 12 rugby for the Chiefs and his NPC career for North Harbour.

Jones was a casualty of criticism in earlier years, due to his perceived ‘lack of bulk’ to become one of New Zealand rugby's greatest ever locks. In 1999 he left the New Zealand game to play for the English club Gloucester.

Jones returned to New Zealand in 2002, after retiring from the game, and is now a regular television commentator with Sky TV.

If you are looking for a down to earth, personable and entertaining rugby speaker or anecdotal dinner speaker – look no further than Ian Jones.