Ian Ferguson (Fergs) is one of New Zealand's most winning athletes of all time. 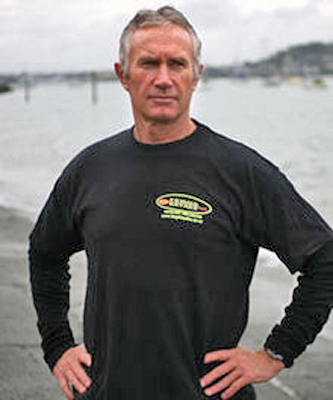 Ian Ferguson Born 1952  Few New Zealanders have competed at more Olympic Games than Ian Ferguson, and no-one has won as many medals or as many golds.

As a youngster trying out kayaing after shining at surf lifesaving, he competed at the 1976 Montreal Olympics, where he failed to make much impression.

Four years later, after gaining experience on the European circuit, he was one of just four New Zealand athletes who defied the western boycott and competed at the 1980 Moscow Olympics. Therehe showed the benefits of his experience by making the K1 500 and K1 1000 finals.

After Moscow, Ian retired for a time, not because he didn’t have the desire, but simply through lack of money. He opened a business in Auckland, repairing and distributing video-game machines. But after being offered limited financial support by the New Zealand Sports Foundation, he came back strongly in 1983, claiming a silver medal in the K1 500 at the world championships in Tampere, Finland.

By now Ian, Paul MacDonald, Alan Thompson and Grant Bramwell, New Zealand had a core of world-class kayakers, which was amazing considering there were only about 50 competitive kayakers in the country. The New Zealanders worked each other over during training, where the racing was often tougher than in competition.

At the 1984 Los Angeles Olympics, he was unstoppable, winning the K1 500 by half a length from the Swede, Lars-Erik Moberg, and just 90 minutes later teaming with Paul MacDonald to win the K2 500 by more than one second. The next day he completed an amazing treble by teaming with MacDonald, Thompson and Bramwell to win the K4 1000 gold medal. The New Zealand four became known in kayaking circles as the Dream Team.

There were suggestions that their Olympic medals were “soft” because of the Eastern bloc boycott of the games, but Ian pointed out that they had beaten all the world’s leading paddlers in the months before the Olympics.

Ferguson and MacDonald emphasised their point by winning a fiercely-fought K2 500 final at the 1985 world championships in Belgium, pushing East Germany and the Soviet Union into the minor placings. In 1987, at Duisburg, the pair added another world title, in the K2 1000, and landed a silver in the K2 500.

By the 1988 Seoul Olympics, Ian was 36, long in the tooth for a top athlete, but he had trained superbly, and he and MacDonald retained their K2 500 title, as well as winning a silver in the K2 1000. Ian was the New Zealand team flag-bearer at Seoul.

In 1990 Ferguson and MacDonald, still defying the ageing process, were second in the K2 10,000 at the world championships in Poland.

Unbelievably Ian, at the age of 40, contested a fifth Olympics, at Barcelona in 1992. He and MacDonald again performed extremely well. They competed in the K2 500 and K 2 1000 and made the final of the longer race, going faster than ever before.

After retiring from competition, Ian, who had initially trained as an accountant, stayed close to kayaking. He set up a marine sports and kayak hire business in Auckland and Wellington, spent time designing and developing new kayaks and became a national coach and administrator.

Ian and his wife, Alison, have two sons. One, Steve, became an Olympic swimmer before turning to kayaking with even more success in the 2004 and 2008 Olympics.

Ian Ferguson was a Halberg Coach of the Year finalist in 2003 and has been an official with the New Zealand Olympic team’s kayaking segment at two Olympics.

Because of his kayaking heroics, Ian's surf lifesaving prowess is often overlooked. Yet he was one of the big New Zealand names in this sport.

In 1972 he scooped the New Zealand ironman, surf ski and long board titles. Thereafter he seemed to pick up national surf lifesaving titles at will. Among the individual titles he won were the ironman from 1974-76, the surf ski race in 1976, 1977 and 1990, and the Malibu board race in 1976. Ferguson won four gold medals in the 35-40 age group at the 1991 surf lifesaving world masters.

He was inducted into the New Zealand Sports Hall of Fame in 1993.

Then in 2009 at the age of 56 Ian announced he was bringing whitewater rafting and kayaking to South Auckland in a world-first facility.

Ian will run the whitewater course - his brainchild - with his two sons, fellow Olympian kayaker Steven and Alan.

Expected to open in time for the 2016, it will adjoin the TelstraClear Pacific events centre, roughly halfway between Auckland City and Auckland International Airport. About 1.7 million tourists drive past the location every year.

The world's first whitewater facility in an urban centre, it will comprise two horseshoe rivers fed by a pond at the base. One river will be professional grade and the other will be suitable for school groups and beginners.