Hamish Bond has won world honours in rowing and cycling. His performances with Eric Murray are unparallelled.

The following year, he and Eric Murray combined to win the coxless pair at the 2009 World Rowing Championships. After this performance Hamish and Eric won the team of the year award at the 2009 New Zealand Halberg Sports Awards.

They continued to row together in the coxless pairs and competed at and won the World Cup Series and at the 2010 World Rowing Championships on Lake Karapiro, New Zealand 2010. They won their 2nd world title together in front of a passionate home crowd. Bond describes racing in front of a home crowd as a "once in a lifetime experience". They continued their undefeated streak, winning gold at the 2011 World Rowing Championships in Slovenia.

In the 2013 New Year Honours, Bond was appointed a Member of the New Zealand Order of Merit for services to rowing In 2014 he set a World Indoor Rowing Record for the 60 minute category.

At the 2012 London Olympic Games they took six seconds off the world record of 6:08.5 in their heat for the men's coxless pair. In the Olympic final they surged into the lead after the 500 meter mark to win the gold medal in 6:16.65 by open water. The victory capped an undefeated streak that began when Murray and Bond began racing the pair internationally in 2009.

After London, Bond and Murray decided to continue as a partnership aiming towards the 2016 Rio de Janeiro Olympic Games. They continued their unbeaten run through the next 4 years winning the World Championship Coxless Pair in 2013, 2014 and 2015. In 2014 in Amsterdam they doubled up to win both the coxed and coxless pair events, setting a new World Best Time in the coxed pair of 6:33.26.

In Rio, Bond and Murray won their second consecutive Olympic gold medal, dominating the field and completing their 8-year unbeaten run together. In 2016, after returning home from Rio de Janeiro Bond and Murray wrote a book describing their journey through the years of rowing together. This was published and commended for its candid and honest portrayal of their time together. 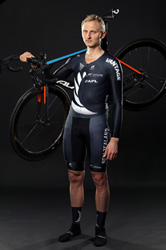 Outside of rowing, Hamish has always been a keen cyclist. In 2009, he raced at elite level in New Zealand, competing in the six-day Tour of Southland.

In November 2016, Hamish announced that he would take a break from rowing in 2017, and concentrate on cycling instead. In his first attempt at the national time trials in January 2017 he finished in third place, he then won bronze medal at the Oceania Championships. Hamish competed in the 2016 Tour of Southland with the Vantage Windows and Doors Team. He was selected to represent New Zealand for the 2017 World Championships, held in Norway in September 2017, On 5 January 2018 he won the elite men's time trial at the national road cycling championships in Napier, NZ in a new course record. Off the back of this performance, he was selected to represent New Zealand in road cycling at the 2018 Commonwealth Games on the Gold Coast. In March 2018, Hamish won the gold medal in the elite men's time trial at the Oceania Championships.

On 10 April 2018, Hamish won the bronze medal in the road time trial at the Commonwealth Games in Australia.