Grant Nisbett has seen more All Black tests than anyone 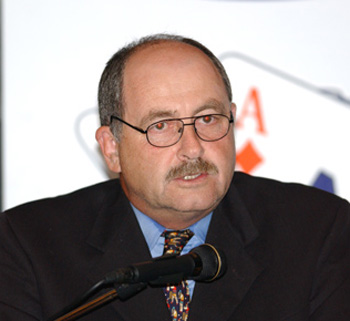 Grant Nisbett admits the memories of his test rugby commentary debut are getting a touch hazy. It was over 30 years and more than 250 tests ago, after all.

But two things stand out. All Blacks v France, Lancaster Park, June 16, 1984, was his first call of a televised rugby match. Talk about being put in at the deep end.

His double-century arrived with little fanfare in 2010. As the fireworks crackled over Carisbrook and the bagpipes played, Nisbett packed away his gear and reflected with a few quiet beers with colleagues.

A proud Wellingtonian, Nisbett began his radio career in 1968 when he chose the NZBC over a physical education degree at Otago University. He began as a No 8 for the Poneke club but ended up at prop, and played four seasons of senior rugby before the clash with Saturday sports reporting became too much.

"People say, `What would you know about rugby?', and I say, `Not a hell of a lot, although if you look at the 1970 almanack you'll see I did play one first-class game: Wellington Colts v Horowhenua."'

His shift to television in 1984 signalled a tricky period in his career. The doyen, Keith Quinn, was still on the scene, and in the early 1990s John McBeth also made the switch from radio. Three into one didn't go, even if TVNZ initially tried a two-commentator routine, when Quinn and Nisbett called the 1991 World Cup final.

"Keith and I had always been great mates. I started in radio with him and we've never had a problem at all. It just got a bit confusing who was doing what. When Sky came along it was a bit of a godsend."

Quinn, who estimates he called around 230 internationals but fewer than 200 All Blacks tests, was as proud as anyone about Nisbett's achievement.

"He's a terrific bloke. Friendly, supportive and loyal in his private life, and in his work, thorough, professional and exact. His hallmark has been his consistency," Quinn said.

"You could safely say Grant's seen more All Black rugby than any person on the planet. It [200 tests] is a really significant milestone."

Nisbett is a regular face around Wellington, in his communications role with the TAB in Petone, watching his beloved Poneke or just leaning on the bar at his local. Critics will always exist, he says, but surprisingly he welcomes the hordes who bowl up for a chat.

"My parents taught me to be polite, so I never rubbish people. Everyone's entitled to their opinion. I quite enjoy getting approached by people to talk about footy."

Kilbirnie Park gives him an outlet on his rare Saturdays off, watching Poneke.

"I can tell the referee what I think, which is something I can't normally do. It's a rare opportunity."

And the future? It's a fair chance Nisbett's tally will rocket up towards 300 in coming seasons.

"It's probably in other people's hands. That's the way broadcasting works.

"I feel like I'm going well. If you maintain your enthusiasm and your interest in the game ... obviously you can't go on forever but I feel pretty happy. I'm still on the right side of 60 ..."