After dinner, Master of Ceremonies. Wellington based. Speaking style; Warm, engaging, very funny, great control.
In July 2017 Ginette was invited, along with Sam Neill, to speak at John Clarke's memorial in Melbourne in front to 3,000 people. Ginette was literally the stand out performer and drew accolades for her spontaneity and humour. Such is the impact and stature of this amazing comedian. 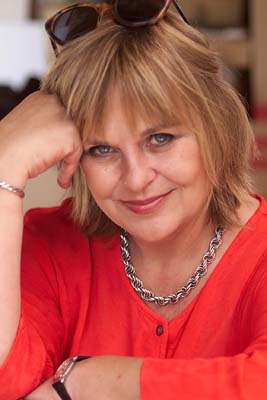 “Cultural Ambassador and Certifiable Living Treasure” Ginette McDonald is everybody's favourite. Whether your looking for a humorous after dinner speaker, a great MC or a celebrity debater Ginette will bring excellence to the role.

Ginette’s career has spanned over 35 years. She devised the Kiwi comedy icon Lyn of Tawa in the early 70’s,followed by a five year acting stint in the UK. As an actress, she has done an enormous amount of theatre,television and radio in New Zealand,England and Scotland. For many years she worked for TVNZ as a drama producer/director.

She has written articles,opinion columns,reviews,after dinner speeches and debates. She has been a regular on TV1’s Good Morning as a social commentator and agony aunt.

Ginette was the narrator in the 2011 WOW Kiwi icons section and has also toured with the Dunedin and Christchurch symphony orchestras narrating The Proms, The Firebird and Badjelly.She is kept busy as a warm and humorous after dinner speaker and conference MC and has won numerous awards for acting, producing and public speaking.

Her conference work has taken her to Singapore,Australia ,Fiji and all over New Zealand.

Ginette recently appeared at Fortune Theatre Dunedin in the award winning American play Love Loss and what I Wore and began 2014 in a return season at Circa Theatre of the 2013 sellout Dave Armstrong Kiwi comedy Kings of the Gym.

She is perhaps better known by her alter ego "Lynn of Tawa". Lynn of Tawa was a character invented by Ginette. See "Lynn" in action here.

In 2007 she was awarded the ONZM for services to Entertainment. She is the proud mother of actress Kate McGill.