Gavin is currently a BLACKCAPS Selector working alongside Mike Hesson, the BLACKCAPS Coach, and is charged with developing a world-leading selection model for New Zealand Cricket. 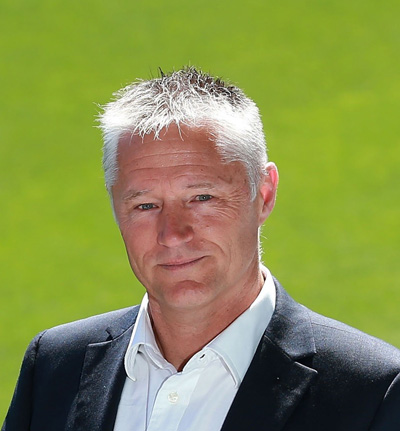 Gavin Larsen is an experienced MC and keynote speaker.

He has been in demand as both an MC and speaker since the ICC Cricket World Cup 2015 which was successfully hosted by New Zealand and Australia. He spent two years as Cricket Operations Manager at CWC2015, and offers a unique behind-the-scenes personal perspective on what were the key success factors behind what has been acknowledged as arguably New Zealand’s finest ever sporting event delivery.

Gavin is currently a BLACKCAPS Selector working alongside Mike Hesson, the BLACKCAPS Coach, and is charged with developing a world-leading selection model for New Zealand Cricket.

He has previously been both a director and then CEO of Cricket Wellington, charged with shaping the direction of cricket in NZ’s capital city. This followed a seven year period as Head of Sponsorship for The National Bank and ANZ National Bank, delivering the Bank’s international cricket sponsorship and taking responsibility for the full Bank-wide sponsorship programme.

During Gavin’s playing days he represented the BLACKCAPS between 1989 and 1999, playing 8 Test Matches and 121 One Day Internationals.

Prior to his cricket career, he was an IT specialist working for The National Bank for ten years.

Gavin is an engaging speaker who has a friendly, honest, and captivating style. He brings many cricket and general sporting analogies and anecdotal stories to the table, which range from leadership and management through to general business success factors, all delivered with a human touch. He has a great feel for his audience, and receives positive feedback on his ability to present key messages to brief.

Gavin is as equally at home in MC’ing a conference as he is being a keynote speaker, or facilitating and delivering an outstanding Q and A session with other guests.

“We invited Gavin to speak to our staff here in Wellington, to talk about Leadership, Personnel Goal Setting and Team Work. What a motivated down to earth guy. Gavin articulated his experience and involvement in the logistical nightmare of planning and organising the teams movements across New Zealand and Australia for the 2015 Cricket World Cup. (14 Teams, 49 games in 14 Venues across NZ & Aussie) along with some great cricket and life stories. Gavin is as passionate about Wellington as he is about cricket. He connected with the audience at a personal level, kept them well engaged with his stories and honesty. A great team building night from a legendary Kiwi” The Fletcher Construction Company Ltd

Gavin delivered an outstanding presentation for the NZ turf and recreation conference recently held at the Sky City convention centre  – Gavin has an ability to engage the audience with his energy and brought to the table a  communication style that created a dynamic session. Gavin was able to bring his wealth of experience across many facets of sports business and tailor the delivery of specific content  to our audience to add real value  - we highly recommend Gavin as a key note speaker. NZ turf and recreation governance board

It was a real privilege to have Gavin Larsen speak at the 2015 Wellington City Council Sport and Recreation Forum. As our keynote speaker, Gavin spoke about the logistics of organising the ICC Cricket World Cup 2015 and the legacy work that cricket hopes to get from the event. The feedback we received from attendees was extremely positive - they really enjoyed his engaging and visual presentation - a great balance of facts, stories and entertainment. Sports & Club Partnership Leader, Wellington City Council