The man from "New Zealand Idol", Frankie Stevens, is one of New Zealand's top entertainers. His mixture of comedy and musical class is unique. 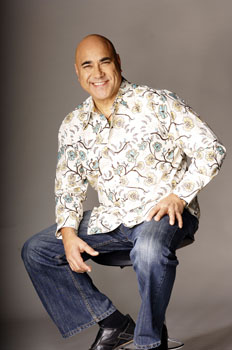 When Frankie Stevens performs at a corporate function you can be assured that the audience will know they are seeing an entertainer of international standard. His blend of comedy, impressions of famous people such as Dean Martin, Tom Jones etc, and a remarkable cabaret act makes Frankie Stevens an act not to be missed. If you're lucky he'll bring his daughter Mandy with him and this adds to the performance.

Wellington born, Frankie knew from an early age that singing was going to be his career, commencing when he sang with the school band in Upper Hutt at the age of thirteen. His professional career began at the age of 16 when he moved to Sydney, Australia to join a group called "Peter Nelson and the Castaways". The group recorded several songs with Frankie with some success, and after a couple of years of touring Australia and New Zealand; he left the group to try his luck as a solo artist. During this period he recorded a number of successful songs, one song in particular "My Elusive Dreams" became a major New Zealand hit. It held the No.1 spot on the charts for 3 weeks and managed to stay in the top 20 for 2 months.

In 1970, he moved to London where he became something of a minor sensation winning the talent show 'Opportunity Knocks' six times in a row. He sang at both The Palladium and Albert Hall, the latter being one of the high peaks of his career. While in London, he represented Great Britain in several song contests, winning the Silver Prize in the Second Tokyo Music Festival, the Bronze Medal in Caracas Venezuela, and the Gold Medal at the Golden Orpheus Song Festival in Bulgaria. Stevens was the first Singer from outside the eastern block to win this coveted prize.

1971 saw him move to Las Vegas where he appeared regularly. Over the next few years Frankie toured or appeared with number of International stars, Olivia Newton John, Shirley Bassey, Milton Berle, Sammy Davis Jnr, just to name a few.

In 1972 an opportunity arose for Frankie to join what was regarded at the time as New Zealand's best International show band, "Mary and the Maoris" (formerly the Maori Hi-Five) the group was starring in their own show at the Nassau Beach Hotel in the Bahamas, he regards this as one of the most entertainment learning experiences of his career. From there they moved onto the Sheraton Hotel and Casino in San Juan, Puerto Rico for an 8 month season.

1974 saw him sign a 3 year contract with CBS Records in London, This was followed by a tour of some of the finest Showroom's in Great Britain and the Continent as far as Northern Scandinavia. He appeared in musical specials on television with artists such as Petula Clark, Morecambe and Wise, as well as Cilla Black. During this period he also appeared at the World-renowned "Talk of the Town" for a 5-week season where he starred in his own show. After Europe, Stevens embarked on a tour of Japan's major cities, anchoring the first half of the show for one of the world's great performers "Shirley Bassey". 1976 saw him move to Honolulu Hawaii, where for the next 5years he appeared in his own show for 8 months of the year at the magnificent Royal Hawaiian Hotel in the beautiful Monarch Showroom.

During his Hawaiian stay he featured in one of the most successful TV cop shows of the day, "Hawaii Five O" and played a Russian spy IN A CBS Movie of the Week called M.Station Hawaii which was directed by Hawaii Five O's Jack Lord. During the Hawaiian off-season he performed in Europe, mainland USA and Canada. Since 1982, Frankie has resided in his Homeland, New Zealand. In 1994, he was invited to appear in Harry M. Miller's New Zealand's touring theatre production of "Jesus Christ Superstar" in the role of the High Priest "Caiaphas"

On the strength of his highly acclaimed performance Miller invited him to reprise the role in the '94-95' tour of Australia, this he did to not only raise his profile in Australia, but to take the opportunity of performing with his younger brother Jon who played the role of Judas.After returning from Australia he had the opportunity to tour New Zealand with one of the countries greatest performers, Sir Howard Morrison, he regards this as a personal highlight of his career.

In 1998 he was invited to join the New Zealand Millennium Office (NZMO) as their events coordinator for the upcoming millennium celebrations, this office was responsible for ensuring that New Zealand received maximum exposure from all Government sponsored events before during and after the year 2000.

He was part of a specialist team that delivered some of the following events as the year 2000 arrived:

Since 2000 Frankie has been constantly on the road travelling throughout New Zealand, Australia and to many other parts of the world such as Malaysia, the United States, and the Bahamas where he has performed in numerous Corporate Events, acting in an MC role or as a performer.

It’s not hard to see why Frankie Stevens is one of the busiest corporate entertainers in New Zealand.