Frank Bunce is one of New Zealand's greatest rugby centres. A star of reality television, Fight for Life, and would you believe is of royal descent. 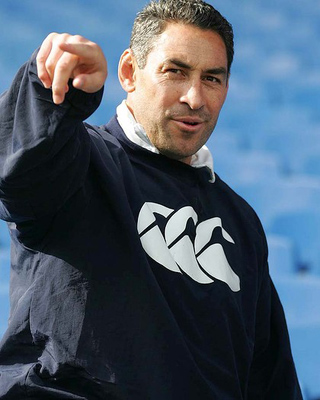 Frank was born in Auckland and educated at Mangere College. He played for the Manukau club, and took a long time to emerge from club rugby. In 1986 he played for Auckland and was selected for the North Island. He stayed with Auckland until 1990 and received his first All Black trial in 1988.

He tranxferred to North Harbour in 1991 and although being of Niuean ancestry he was selected for Western Samoa, toured New Zealand and then performed impressively for them at the 1991 World Cup.

Following his performance in the World Cup Laurie Mains included Bunce, now 30 years of age, in his squad for the 1992 NZRFU centennial series and after one match at second five eight he became the regular All Black centre until 1997.

Frank made his All Black debut on Saturday, 18 April 1992 against the World XV in Christchurch.

He and North Harbour teammate Walter Little formed a formidable midfield combination during that period, arguably the best in the world. Bunce missed just one test during that time, against Japan at the 1995 World Cup. He also appeared for New Zealand at Sevens, at the first Sevens World Cup in 1993.

Frank played 69 matches for New Zealand, 55 of them tests. He scored 20 test tries. His fearsome tackles made him a player to be respected.

When Frank retired in he was the second oldest All Black test player, and the oldest back. He was also the most capped test centre.

He played hius last test on Saturday, 6 December 1997 against Englad at Twickenham.
v England at London

Frank is also of royal descent. He is the direct descendant of George Rex, one of three sons borne to King George III by Hannah Lightfoot, a Yorkshire draper, before the King's marriage to Queen Charlotte. He is one of several hundred descendants living in New Zealand and Niue Island.

Frank's on and off the field anecdotes make for a very lively and entertaining after dinner presentation.