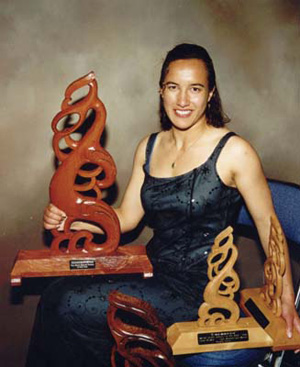 Dr Farah Palmer is a lecturer in the Department of Management at Massey University and a former captain of New Zealand's women's national rugby union team, the Black Ferns. In December 2016 Farah was appointed as the first female board member for Rugby New Zealand.

The undisputed champions of women's rugby over the past decade, New Zealand's Black Ferns have a winning record second to none in international Rugby Union. The New Zealand team swept all before them during the 2002 World Cup Tournament in Spain, beating England 19-9 in the Final at Barcelona's Olympic Stadium to retain the title they also won during the 1998 World Cup in Amsterdam.

Farah holds a Doctor of Philosophy and a Bachelor of Physical Education (First Class Honours) from Otago University.

Farah holds the following leadership roles – Acting Director for Te Au Rangahau, the Maori Business Research Centre within the College of Business at Massey University; Executive Board member of Nga Pae o te Maramatanga (Centre of Research Excellence) at the University of Auckland; and Member of Te Mata o te Tau, Academy for Maori Research and Scholarship at Massey University.

Farah was previously a Member of the Ministerial Taskforce on Sport, Fitness, and Leisure (2001).

She has won several awards and scholarships including Maori Sportswoman of the Year Award in 2002 and Women’s Rugby Player of the Year at the 1998 New Zealand Rugby Awards.