Doug Avery is an inspirational force to be reckoned with. Every business needs to hear Doug's "down home" story. 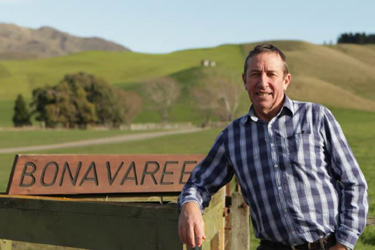 In 1999 Doug Avery was locked into failure.

The Marlborough sheep and beef farmer was barely coping, personally and financially, after years of successive drought had ravaged his farm.

"The severity of eight years of drought, including four one-in-one-hundred-year droughts, was so bad that I recognised the road that I was travelling was completely stuffed," he says.

His 1500ha farm, Bonaveree, overlooking the Dominion Salt facility at Lake Grassmere, has been in the family for nearly 100 years. But the glorious sunshine and drying north westerly winds that create perfect conditions for extracting salt from seawater were destroying the 59-year-old and his farming business.

It wasn't a case of overnight success for Doug, with some terrible times, but the small gains made in the next four years were just enough to keep up his enthusiasm.

"I knew that I was operating with the last opportunity that I had because it costs money to change and I had nothing else in the tin."

In 2004 Doug and a group of local farmers formed the Starborough Flaxbourne Soil Conservation group, with the aim of arresting the environmental, financial and social degradation in their farming community.

Between 2008 and 2010 - the year Avery won South Island Farmer of the Year - Bonaveree doubled its output.

In 2014, during a hot, dry summer, neighbour Dominion Salt harvested 90,000 tonnes of salt from its evaporation ponds. An average year's harvest is 60,000 tonnes.

Today, a farm that barely supported Doug and his wife, Wendy, while they killed themselves with work now has six fulltime staff, including son Frazer, and "buzzes with science".

His gratitude for the systems that "saved my business, my family and life" has resulted in him talking to farming groups around the country, promoting farming practices that are high reward and low impact.

"I want to live in a country where the wealth and well-being is at the higher end, not the lower end, and for the last 20 or 30 years this country has been heading the wrong way. 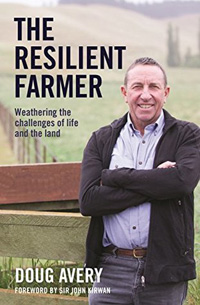 In July 2017 Doug published "The Resilient Farmer" which was met with great reviews and saw Doug conducting seminars and speaking throughout rural New Zealand, at times with Sir John Kirwan.

His book The Resilient Farmer is not only his own story of survival but it also encourages others to acknowledge and share the mental challenges of the unpredictable rural sector. It’s an inspiring read on many levels and a useful conversation starter. (more)

Doug continues to inspire people from all walks of life, not just farmers.

He presents with a contagious enthusiasm and zet for life and his humour makes the serious message he presents easier to sabsorb.

Doug is the perfect motivational and inspirational speaker as his message of "reslilience" can be translated in to business and personal life.

Many compoanies suffer from the "Silo" effect where departments refuse to work togehter for the common good. Doug can resolve this with his presentation that shows what happens when people work together.