Chef on a Mission A Journey of Resilience and Leadership 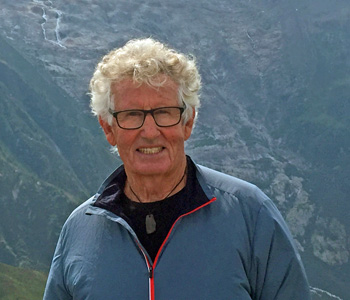 Dave Currie is perhaps best known as the Chef de Mission of New Zealand's Olympic and Commonwealth Games teams. His approach to creating a winning culture and environment led to the "One team one spirit" ethos. But his journey there was far from conventional.

Growing up in South Auckland Dave went to school in Mangere. He spent 17 years in the meat industry, and at 27 was appointed Manager of Peach Products, at the time New Zealand's largest bacon and small goods company. Always into sport he represented New Zealand in wrestling, touring India with the New Zealand Team in 1963.

In 1982 Dave took a break from management, gardened and ran. He came 2nd in the New Zealand marathon Championship in 1982.  Subsequently turning his hand to leadership as Chairman of the Otara Market, a role in which he revolutionised and breathed life into what is now an institution.

In1988 Dave ran as a  guide for a blind marathon runner at the Seoul Paralympics, this experience showed him another aspect to athletics and leadership and he was subsequently appointed Chair of Paralympics New Zealand and appointed Chef de Mission of the Paralympics Team in Sydney 2000

From 1987 to 1997 Dave was Race Director for the New Zealand Iron man Triathlon blazing the way for New Zealand's success in this event. For 17 Years he was Executive Director for The Halberg Trust - Responsible for organizing Halberg Awards during all of this time, including Millennium Awards in 1999. During this time he was awarded a Winston Churchill Fellowship traveling the world studying integration strategies for people with disabilities.

Dave is no stranger to personal challenges either. In 2003 he was diagnosed with bowel cancer, receiving 27 weekly chemotherapy treatments

Since 2017 Dave has walked 1300km each year through France and Spain and is involved in environmental work in his home town of Raglan Today Dave is in demand as a speaker on Resilience and Leadership, subjects on which he is well equipped to speak, his success is defined by his view ‘I had no concept of what was impossible.

"The final speech on the first day was a dinner talk from Dave Currie who was the Chef de Mission for the New Zealand Olympic Team in Beijing. For a country of just over four million people, New Zealand consistently punches above its weight in the Olympics. This year it won five gold medals. However, Currie's speech was about the challenge of managing a team of single-minded, competitive, high-performing athletes. His message though was equally applicable to a CIO running an IT department. To get the support of your team you first have to understand everyone's individual needs and then show them trust."