From Christchurch Graphic Designer to artist of Rock stars and Movie stars in America and Europe. 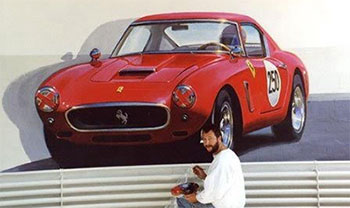 Dave Blyth will wow an audience with a speaking and video presentation of a normal Kiwi guy just doing his OE and ending up working for Rock stars and movie stars and becoming one of the world's best Ferrari artists.

Dave Blyth remembers well his school report cards which had comments like “Would do better at maths if he didn't draw pictures of cars".

After seeing these comments his Mother told him;  "You will never make any money drawing pictures of cars."

It was only when he was charging $5000 US for a painting of a $5 million dollar Ferrari for a Swiss collector and being flown across the world to paint a mural for a Florida Billionaire on the wall of his Penthouse apartment at Atlanta Motor Speedway that Dave realized his Mothers words would not hold true! 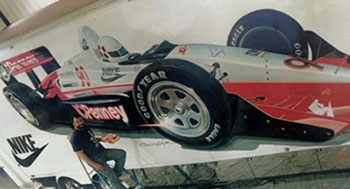 Dave with a painting for a wealthy Californian Vineyard owner in Nappa Vally California.

Dave with an acrylic painting of a $5 million dollar Ferrari on a Swss collectors wall.

It was a different time in the 1990s. Computers didn't rule the world and people who could paint realistic paintings were in demand.

Dave has some great stories of working for household names like movies stars Burt Reynolds and Miami Vice's Don Johnson plus Rock star Chris Rea and Formula One stars Nigel Mansell and Gerhard Berger, or as Dave refers to him %$^#@ Austrain F1 %$^&*(*.