Daniel Batten is a serial entrepreneur and CEO coach "From Ingenuity to Invincibility". Daniel, a successful hi-tech entrepreneur, now coaches a growing number of CEOs to NZs fastest growing companies. Each company has grown significant commercial results by growing the founder 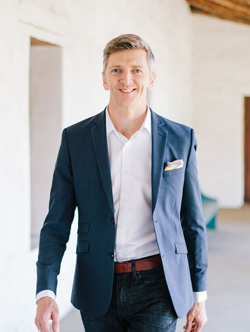 Daniel graduated from Auckland University with a MA in English, having written a groundbreaking thesis (1994) on the human impact of online communication.

Daniel instead pursued a career as an actor – appearing multiple times in America’s top rated TV episodic, and on stage alongside Jermaine Clement (Flight of the Conchords).

Over the next decade he became a successful serial-entrepreneur – taking part in three leadership teams that launched three successful international products, and achieved valuations between $10Million-$120Million.

He returned to the media spotlight after becoming New Zealand’s 1st CEO to successfully raise angel investment-group capital (2004). His company launched one of the two most successful software products for University scientists worldwide, improving how 100,000+ molecular biologists did research.

Over the next ten years he launched a third career – this time as a high-performance coach/ author and speaker. He is author of three business books including “The 6 Secrets of Authentic Influence.” As a speaker he has achieved inspirational results (not to mention standing ovations) by combining his unique blend of business intelligence and dynamic stage energy.

Daniel has helped clients achieve results that only the very top echelon of coaches globally can create. His mid-sized clients achieve an average 31% increase winning contestable business, an average staff engagement increase of 13%, and an average profit increase of more than 200%. His small business clients’ results include a minimum revenue increase of 257% and a 100% success-record raising investment capital (average capital-raise: $1.28Million).

Daniel has achieved these phenomenal client results by developing a unique method to implant the cultural, leadership and mindset innovations the All Blacks made from 2004-16 into any business to create explosive growth, a more valuable brand, and very few losses.

Daniel's first book "To change the world with one pitch" will be released in June 2017.

For fun: one of Daniel’s legendary TV star-roles (2010 Ad of the Year finalist)

Daniel is a brilliant and inspiring speaker.  In fact he’s so good I’ve hired him to speak at our premier event for the last 3 years, and each time he’s stolen the show.  The thing with Daniel is that he is engaging, lively, authentic and thought-provoking all at the same time.  His presence has that larger-than-life-ness which captures attention, and holds it in a vice-like grip that almost hurts.  And, most importantly, Daniel always gives people something practical that they can use the very next day, which means he delivers instant value.

The only reason I wouldn’t recommend Daniel is because once the secret gets out, he’ll be booked-up years ahead