Brian is a sports coaching sensation. Brian was the "Rugby League International Federation's 2006 Coach of the Year" and former coach of the New Zealand Warriors.. 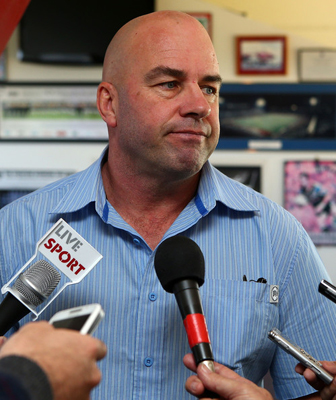 As the Kiwi's rugby league coach. Bluey led the team to victory in the 2005 Tri-Nations Cup and again to close runners up in 2006. In 2011 he returned from coaching English Premier League Club Leeds, Bluey has shown time after time that he is one of the best rugby league coaches on the planet.
English premier club Leeds was the 2007 Premiers and The World Champions. Bluey arrived in December 2007 with a "hard act to follow" and coached Leeds to their second World Championship in February 2008 against the Melbourne Storm and took them to premiership wins in 2008 and 2009. An amazing result.
Bluey's story would make a great movie. He took a Kiwi team with great potential and turned them into world beaters. In his very first match in charge, Brian oversaw the Kiwis' first win in Sydney in 46 years -- a 38-28 upset of Australia in October 2005 in the opening match of the Tri-Nations tournament.
The Kiwis went on to clinch the Gillette Tri-Nations Rugby League title the following month, whitewashing the Kangaroos 24-0 in final in Leeds to record their first series win over their trans-Tasman rival in 52 years. Not bad for a team that finished last in the same tournament the previous year.
His result saw him nominated as a finalist in the coach’s section of the Say When Halberg Awards. New Zealand’s top sports awards. In a rugby-mad country, this is no mean feat. Brian didn’t win but it heralded a return to Rugby League glory.
In the book "The year the Kiwis flew: from wooden spooners to winners" - Peter Leitch (aka The Mad Butcher) with Richard Becht. The write up said it all; "With a new coach drawing inspiration from his wife's gritty battle with cancer, and a team fired up and running on aroha, a new spirit filled the camp"
None of this came as any surprise to anyone who knows “Bluey”. His Father was regarded as one of New Zealand’s finest ever Rugby League coaches so from early childhood League was in his blood. So was winning! Soon after he took over as coach of the Kiwis Brian told a mate that he intended to make international league bigger than the NRL (Australia’s domestic competition) in Australian eyes. His friend laughed and said it would never happen.
Wayne Bennett, stepped down after watching his team humbled 24-0 by New Zealand in the Tri-Nations final in November 2005. Hard for any Australian coach to accept.
In the 2006 Tri-Nations Bluey once again showed his coaching skills as he took his team once again to the finals. Beaten narrowly by the Australians the Kiwis once again proved they were capable of consistently beating any team.
He believes in team culture. “Everyone in the squad is seeking and enjoying excellence, so they will do the extra training without questioning it. At the end of each training session, they are searching for ways to become better.”
In February 2008 Bluey led Leeds against the Melbourne Storm for the World Club Championship. It was played in Leeds where the Kiwi's beat Australia 24-0 in 2005 and Leeds once again became World Champions.
Brian McClennan is, without doubt, one of the finest coaches in any sport. He believes in culture and takes this theme into his business keynote talks..