Bill James, is a professional Speaker and Trainer, who will get your staff or conference delegates to take action. 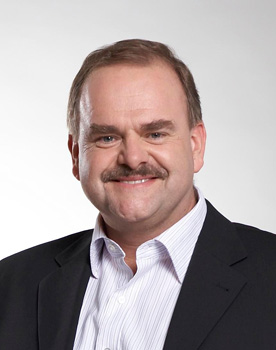 As a specialist on attracting new business through referrals, the creation of profitable business relationships and how to create a sales process that fits within your team’s internal values – so they want to use it – Bill has a simple and easy to understand presentation style that gets participants to make a commitment to take action with what they have learnt and walk away with an “I can do this” attitude. Although his strategies are breathtakingly brilliant, many are so incredibly simple, as well as cost effective, they can be implemented the very next day.

Bill’s message is relevant to all people who are looking at increasing revenue. His motto -”More Business Right Now! - is all about finding, landing and growing business.

Having achieved his Bachelor of Commerce with a double major in marketing and personnel, Bill began a long and successful professional sales career. His early years included door to door sales and retail selling followed by a move into the world of finance. A short stay with AGC was followed by advancement to Nathan Finance as National New Business Manager and then the position of Finance Manager for Nissan New Zealand.

Tempted into the corporate world at South Pacific Securities as Assistant to the GM he implemented a complete e-based sales program a decade before it was the norm. He then worked as National Sales Manager and later Operations Manager for Multicorp Insurances. Here he ran all departments, negotiated multimillion dollar contracts and helped create new records in sales.

-  Branch Manager for the PSIS. Here Bill quadrupled the size of the branch in 4 years

-  In 1991 Prudential Assurance recruited Bill and he became their ‘Rookie of the Year’ achieving 430% of his budgeted           target and with the next 15 years consistently impressive.

- In 2004, after 15 years of safeguarding his client’s lives and also providing financial literacy training for the NZ Navy and Air force, Bill embarked full time on his current speaking career.

Today Bill chooses to continue running his own speaking and training business, applying the skills gained across a varied and wide-reaching career along-side the new skills he has mastered through ongoing personal education within the speaking industry. As such, in 2013 Bill was accredited with the highest creditation available in New Zealand for a professional speaker- a CSP. In both the 2014 and 2015 years Bill was elected as President by the members of National Speakers Association of New Zealand.

His experience now sees him in demand within the speaking and training industry, often being asked to deliver to: franchise organisations, associations and traditional sales and service industries (particularly financial services) and also highly technical industries (health, engineering, accountants etc) providing sales for non-sales people. His clients have also included the public sector, working with a number of local authorities, schools and government departments.

Outside of his professional life, Bill has been married to his wife and business partner Sue for 28 years and they have two beautiful daughters.